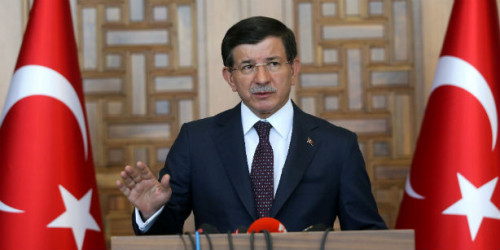 Turkey has begun airstrikes against the Islamic State inside Syria, a day after Ankara’s forces exchanged gunfire with the militants for the first time.

The Turkish air force has carried out three waves of attacks on Islamic State positions in northern Syria since early Friday, as well as striking camps of the Turkish Kurdistan Workers’ Party (PKK) in the north of neighboring Iraq.

“We have approved the third wave of airstrikes in Syria and the second wave in Iraq,” Prime Minister Ahmet Davutoğlu said in a press conference in Ankara. “These operations are not ‘one-point operations’ and will continue as long as there is a threat against Turkey.”

Davutoğlu then travelled to Istanbul for meetings with President Recep Tayyip Erdoğan and the head of the army.

Foreign Minister Mevlüt Çavuşoğlu indicated that the operations are not just retaliation for this week’s attacks by the Islamic State inside Turkey, but are being pursued as part of the plan — put out since last autumn by Ankara — for safe havens along the Turkish bordder.

“Safe zones will be formed naturally”, Çavuşoğlu said. “We have always defended safe zones and no-fly zones in Syria. People who have been displaced can be placed in those safe zones.”

The US has held out against a no-fly zone, which would also be aimed at preventing operations by the Assad regime, for months. Turkish officials put out the story on Friday that Washington had moved towards agreement for a limited area, but the US State Department pushed back the claims.

The externally-based opposition Syrian National Coalition welcomed the Turkish operations, focusing on the significance for the fight against President Assad:

Turkey has sided with the Syrian people and their legitimate demands since the beginning, demands that they continue to repeat to the international community and neighboring countries through their continued revolution. The Syrian Coalition has long warned of the threats the Assad regime imposes and of the consequences of its survival on Syria and the region as a whole.

The Escalation in the Conflict

The operations against both the Islamic State and Turkey’s Kurdish insurgency — who have been fighting each other in Syria and Iraq — followed an escalation of violence that began on Monday.

The Islamic State bombed a cultural center, killing 32 young activists, in Suruc in southeastern Turkey near the Syrian border. On Wednesday, the PKK killed two police officers whom they were linked to the militants.

On Thursday, Turkish troops battled Islamic State fighters who crossed the border, with four Turkish tanks involved and F-16 fighter jets scrambled. Yesterday Ankara confirmed that it has approved the use of Incirlik airbase in southern Turkey by the US-led coalition attacking the Islamic State in Syria and Iraq.

Both F-16s and artillery were involved in attacks on Saturday. Ankara said it has informed both NATO and the UN of the operations.

Meanwhile, Turkish authorities have continued detentions, including of suspected Islamic State members, that began before Monday’s surge in violence. The Prime Minister’s office said 320 people have so far been arrested in 22 provinces in the latest sweeps, which also included members of the the PKK’s youth wing and the Marxist Revolutionary People’s Liberation Party Front.

Rebels: We Are Pumping Water to Opposition-Held Areas Near Damascus

Rebels have said that they are pumping water to opposition-held areas near Damascus, while threatening to cut off supplies to the capital.

Mohammad Abu Udai, the spokesperson of the al-Rahman Legion, said that the faction had begun pumping water from the Ain al-Fijeh spring — the main source for Damascus — to the Jobar neighborhood in northeast of the capital and to parts of the nearby town of Ain Tarma. The distribution was possible after the capture of the Water Unit in Jobar following clashes with Syrian troops and militia.

Rebels have warned the Assad regime that they can cut off water from the Ain al-Fijeh spring, northwest of Damascus, in retaliation for the Syrian military’s attacks. The warning was renewed earlier this month amid the Hezbollah-regime offensive on the town of Zabadani.