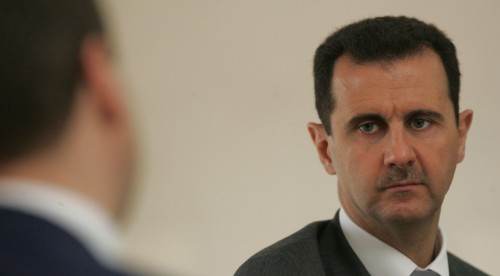 President Assad issued a decree on Saturday that granted amnesty to all those who have deserted or defected from the Syrian military during the four-year conflict.

State media offers no comment before the bare reporting of Legislative Degree No. 32 for 2015. However, pro-Assad outlets are proclaiming that the move shows the regime’s confidence that it has the upper hand over rebels.

In contrast, opposition activists and some analysts are framing the decree as a sign of desperation by Damascus, as it struggles to get men for military service.

In recent months, Syrian authorities have stepped up detentions at checkpoints to enforce conscription and raised the maximum age for service to well over 40. There are reports of raids on houses to seize more men for the battlefield.

This month, Damascus has announced the creation of new brigades, offering salaries well above the average soldier’s income and seeking commitments of at least two years. Significantly, in light of Assad’s decree, the advertisement for the Coastal Shield Brigade appealed defectors and absolved those who avoided military service before March 1, 2015.

Prominent activists on social media are reporting that Kurdish forces have renewed their attempt to take the town of Sarrin in northern Syria from the Islamic State.

Following up on their successful spring offensive along the Turkish border, Kurdish militia — supported by Free Syrian Army units — tried to take Sarrin, between the Kurdish center of Kobane and the Islamic State’s central Syrian position in the city of Raqqa. However, the militants have held out so far.

In a possible sign that the Islamic State may now retreat, grain silos are being blown up, according to activists.

Reports are claiming that rebels have killed scores of regime troops in an escalation of their offensive to take Daraa city in southern Syria.

The rebels made limited progress in the first wave of their offensive, begun in late June, but resumed the rocket and artillery assault on Saturday.

Among today’s claims are the demolition of a security building, killing scores of troops including a regime commander.

A local media activist reinforced the story of the destroyed building as he said, “The city is witnessing fierce battles that have not been seen before”, with the rebel coalition “attacking the city from several directions”.

The activist said that other buildings and positions have been damaged and even “flattened” by mortar, rocket, and “hell cannon” fire.

The regime holds about half of Daraa, symbolic because it was the site of the first mass protests of the 2011 uprising against President Assad.

The pro-opposition Syrian Mirror reports that regime officials have apologized to the family of a rescue worker who was executed.

Salah al-Tabba’, a volunteer in the Syrian Arab Red Crescent in and near Damascus, was killed after he was held in detention for months.

A relative said officials told Tabba’s family that he was executed by mistake, because he has a name similar to that of another wanted man.

For the first, Syria’s main domestic opposition, the National Coordinating Committee for Democratic Change, has joined externally-based opponents in a call for President Assad’s departure from power.

Officials of NCC and the Syrian National Coalition issued a joint statement after a meeting in Brussels on Friday. They said that the road map for political resolution required a transitional governing body that will replace the Assad regime.

“The resolution of the crisis comes through a political process handled by the Syrians themselves under the auspices of the UN,” the groups said. “[This means] a fundamental and comprehensive change of the current political regime, including the head of the regime and all its leaders, pillars, and security agencies.”

The demand is based on a 2012 Geneva accord which envisaged a transitional government of national unity with full powers to run the country and organize elections.

Until Friday, the NCC had left open the possibility of Assad playing a role in a transitional government and had maintained its distance from the SNC’s demand for the President’s departure.