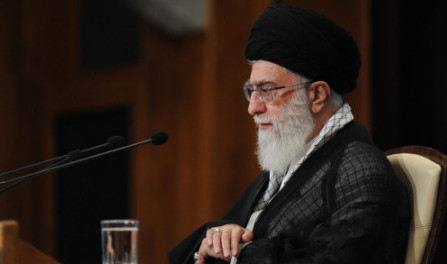 Iran’s Supreme Leader has continued his strategy of backing a nuclear deal with the 5+1 Powers, while pointing to confrontation rather than cooperation with Washington over the Middle East’s crises.

In the latest jab, Ayatollah Khamenei’s office depicted President Obama committing suicide if the US pursued a “military option” against Tehran.

US president has said he could knock out Iran’s military. We welcome no war, nor do we initiate any war, but.. pic.twitter.com/D4Co7fVuVg

The message may have been a response to a Thursday statement by Obama in an interview with the BBC, “We are settling the Iran deal, but we still have a big account that we’re going to have to work — hopefully some of it diplomatically, if necessary some of it militarily.”

The tweet referred to Khamenei’s speech last week, four days after the nuclear agreement was announced with the 5+1 Powers (US, Britain, France, Germany, China, and Russia). The Supreme Leader declared, “We have no talks with US on any international and regional issues.We’ve had occasional talks with US on basic issues like nuclear talks based on prudence.”

Khamenei signaled challenges over Iraq, despite both the US and Iran fighting against the Islamic State: “Traitorous arrogant policy in region is aimed at toppling democratic governments. In Iraq, [it is] disuniting Shia and Sunnis, and disintegrating [the country].”

He also pointed to tension in Palestine, Yemen, Syria, Bahrain, and Lebanon, saying that the Islamic Republic “won’t stop supporting the oppressed nations”.