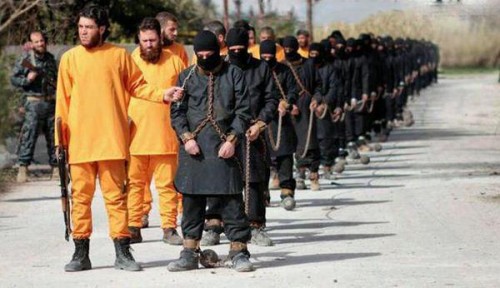 [YouTube has now removed the video but a Dutch site has posted a 6-minute extract.]

Syria’s rebel faction Jaish al-Islam has released a trailer of the video of the execution of Islamic State captives.

Rebel sources say that “The Unified Court of Ghouta”, a sharia court with jurisdiction over all factions and civilians, sentenced the Islamic State fighters to death in late April for crimes against the people of East Ghouta, the area near Damascus which is the base of Jaish al-Islam and a couple of other factions.

The militants had been captured by Jaish al-Islam when rebels cleared the Islamic State out of the Damascus suburb of Barzeh on April 18. The court sentence followed within days.

The death sentences were carried out by the faction, and they took the opportunity to film the punishments as a mirror image of the executions carried out by Islamic State.

The decision was controversial among the rebel force, so the video was held back from release, although an image of the Islamic State fighters being marched by rebels — dressed in the orange jumpsuits that the Islamic State uses for their captives — circulated on social media.

On Thursday, the situation changed when the Islamic State released a video of 12 Jaish al-Islam fighters who were shaved and then executed. The rebel group soon decided to post their trailer — their own video will soon follow.

Jaish al-Islam has carried out other visual protests to challenge the Islamic State’s executions. In February, the faction re-enacted the Islamic State’s death-by-burning of Jordanian pilot Moaz Kasasbeh by putting children in orange jumpsuits in a cage in Douma, and then distributing photographs and videos. 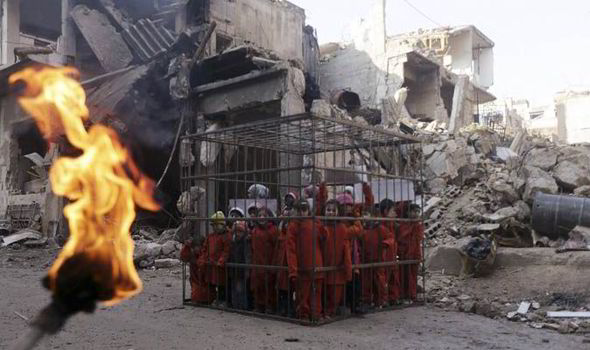