Iran Analysis: 3 Signs that A Nuclear Deal Is “Within Reach” 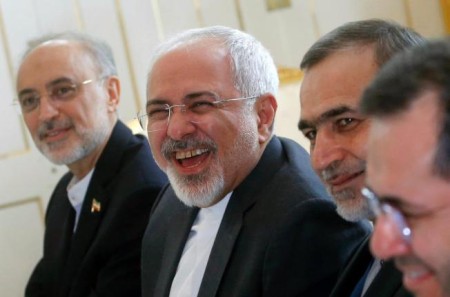 PHOTO: Iranian Foreign Secretary Mohammad Javad Zarif laughs during a meeting with US Secretary of State John Kerry on Tuesday

Iran and the 5+1 Powers put out more signals on Tuesday that they are nearing a comprehensive nuclear agreement, as they extended a June 30 deadline by a week.

In the past 72 hours, the two sides have pointed to advances on the important issues that remain:

URANIUM STOCKPILE: On Wednesday, the International Atomic Energy Agency will announce that Iran has met a target, set in a November 2013 interim agreement, to reduce its stockpile of 5% uranium to less than 7,600 kg.

Opponents of a deal had pointed to Iran “cheating” when the IAEA said in May that Tehran’s stock of the 5% uranium had grown by about 9% to 8,700 kg.

Iran has already converted all of its 20% uranium to oxide powder or fuel plates, making it difficult or impossible to use it for a military program.

INSPECTIONS OF MILITARY SITES: A “senior US official” confirmed on Monday that Washington will not insist on inspections of all Iranian military sites: The entry point isn’t we must be able to get into every [one], because the United States of America wouldn’t allow anybody to get into every military site, so that’s not appropriate.”

Iran’s public line, restated by the Supreme Leader, is that there can be no inspections of any non-nuclear site or questioning of nuclear scientists.

However, Russian Foreign Minister Sergei Lavrov pointed to a compromise last month, when he said that some but not all sites could be inspected by the International Atomic Energy Agency. Last week, US Secretary of State John Kerry put out a high-profile statement that the US would not seek closure of past issues over Iran’s nuclear program, implying a limit on arrangements for future inspections and IAEA investigations.

TIMING OF SANCTIONS RELIEF: An Iranian official, speaking to leading activist Trita Parsi, said this weekend that agreement is nearing on the complicated timetable for the lifting of UN, European Union, and US sanctions.

The official set out a three-phase arrangement in which the timing of removal will be carefully linked to Iran’s implementation of the terms of the agreement over the next few months.

Foreign Ministers of Iran and the 5+1 (US, Britain, France, Germany, China, and Russia) returned to Vienna on Tuesday to pursue the final agreement. Russian Foreign Minister Lavrov — who was not at the discussions this weekend — added to optimism when he said, after a meeting with US Secretary of State Kerry:

The situation at the talks is progressing in a positive direction. There remain questions, mostly regarding procedural issues rather than technical. We have all reason to believe that results are within reach.