PHOTO: Supreme Leader’s Twitter message on Saturday to US leaders

Continuing his pattern of supporting nuclear negotiations while presenting Iran’s strength against a dishonest and decadent US, the Supreme Leader has used prayers at the end of Ramadan to denounce Washington’s role in the region and the world.

In prayers for Eid al-Fitr, Ayatollah Khamenei repeated his line — put out in a letter to President Rouhani on Wednesday — that Tuesday’s nuclear deal with the 5+1 Powers must go through “a legal mechanism” for approval, while warning the 5+1 (US, Britain, France, Germany, China, and Russia) not to “abuse” the agreement.

He then turned to the Middle East:

The #IranDeal text approved or not, we won’t stop supporting the oppressed nation in Palestine, Yemen, Syria, Bahrain and Lebanon

Knocking back speculation that the nuclear deal would pave the way for US-Iranian rapprochement over crises, including the rise of the Islamic State in Iraq and Syria, the Supreme Leader ruled out any cooperation:

US Govs are supporting terrorist, child-killer #Zionist regime. How can we negotiate and agree with such policies? 2/2

Khamenei repeated the defiance and criticism in a speech to Iranian officials and ambassadors of Islamic countries:

Traitorous Arrogant policy in region is aimed at toppling democratic govt. in #Iraq, disuniting Shia and Sunnis, and disintegrating Iraq.

About #Iraq, #Syria, #Bahrain, #Lebanon & region countries, we believe nations must decide themselves. Neither us, nor others can interfere.

In the months leading to the nuclear deal, the Supreme Leader covered Iran’s move to the negotiating table and substantial concessions — forced in part by the imminent economic crisis — with castigation of the US as a deceitful country which could not be trusted. His office not only details American “crimes” in collusion with Israel, but also targeted issues such as race — jumping onto the social media hashtag #BlackLivesMatter.

President Rouhani — who was overruled by the Supreme Leader last summer in his proposal to work with the US in Iraq against the Islamic State — joined in the tough rhetoric on Saturday, while focusing on the nuclear deal rather than the region:

Those who used to say up until now that the Islamic Republic of Iran has breached [its nuclear obligations] and therefore does not have the right to enrichment and that sanctions are legal due to UN resolutions, have come to the conclusion that the policy of pressure and bullying has failed.

They should abolish this policy and choose mutual understanding instead of hostility. 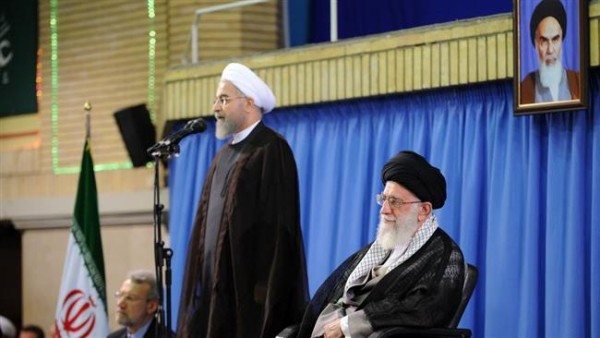 And in his first statement on the deal, the heads of the Revolutionary Guards, General Mohammad Ali Jafari, indicated that options are being kept open over the agreement:

There are some concerns about the sum-up of the nuclear negotiations and the draft resolution of the UN Security Council.

We should still see what happens in practice.

Jafari said he had spoken to the head of Iran’s technical team, Ali Akbar Salehi: “There is a concern, specially about the resolution, that we hope will be resolved, God willing.”

The commander called for “further resistance and standing up to the enemies’ bullying”.

Former MP Esmail Gerami-Moghaddam, an advisor to the detained opposition leader Mehdi Karroubi, has been arrested after he returned to Iran.

Gerami-Moghaddam has been in exile in India and Malaysia. He was taken by Intelligence Ministry officials directly from the airport to Evin Prison.

Karroubi, along with fellow 2009 Presidential candidate Mir Hossein Mousavi and Mousavi’s wife Zahra Rahnavard, has been under strict house arrest since February 2011.