Syria Feature: Caesar and the 1000s Abused and Killed in Assad’s Prisons and Military Hospitals 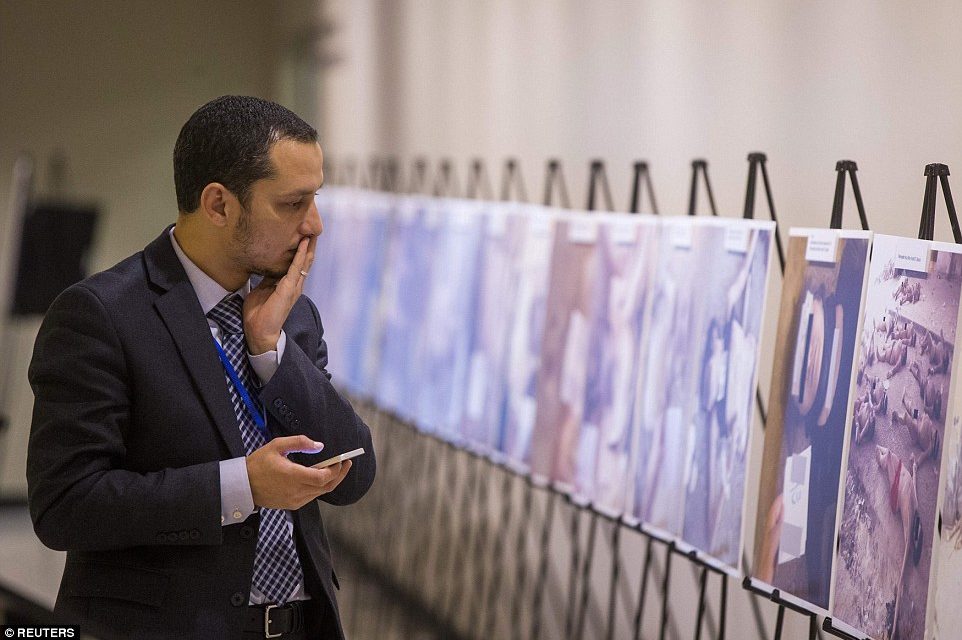 PHOTO: A visitor reacts to an exhibition of some of Caesar’s photographs of abused and slain Syrian detainees (Reuters)

Writing for Vanity Fair, Adam Ciralsky tells the story of Caesar — the military police photographer who fled Syria in August 2013 with pictures of thousands of dead detainees — and of the abuse, torture, and killing in the Assad regime’s prisons and military hospitals:

From its perch atop Mount Mezzeh, Syria’s presidential palace offers sweeping vistas of Damascus. Bashar al-Assad, the 49-year-old ophthalmologist who has ruled Syria since 2000, has an unobstructed view of Mezzeh military hospital, an unprepossessing structure located at the foot of the hill. Mezzeh, in turn, lies several miles from a sprawling complex called Tishreen, which happens to be where Assad did his residency. Both Mezzeh and Tishreen are run by Syria’s Military Medical Services and are supposed to provide in-patient and emergency treatment for soldiers and civilians. In truth, however, the hospitals are way stations in a sadistic assembly line. They are black sites where enemies of the state—protesters, opposition figures, and ordinary citizens who, often for capricious reasons, have fallen out of favor with the regime—are tortured, executed, or simply deposited after being killed off-site. “These are not hospitals,” one survivor, now a refugee in Turkey, told me during a recent trip I made to the region. “They are slaughterhouses.”

U.S. and European officials allege that Assad’s regime has committed war crimes on an industrial scale. They contend that rarely in the annals of international justice has the evidence of such actions been as voluminous. For reasons perhaps known only to Assad and his inner circle, hospital functionaries, working closely with Syrian intelligence agents, have been carefully documenting the regime’s handiwork, using a distinctive numbering scheme to track victims and keep records of the killings that contain fictitious death certificates.

Digital photos have played a vital role as well. For several years, Caesar served as a crime-scene photographer for Syria’s military police. (Vanity Fair has examined and vetted his official credentials. Caesar himself, through intermediaries, has requested that I not use his real name, which is known to the magazine, fearing retribution against his family.) Operating from a drab office inside the Defense Ministry’s Criminal Forensics Division, Caesar chronicled everything from traffic accidents to suicides. After each assignment, he would return to headquarters, upload his pictures onto a government computer, and fasten hard-copy prints onto official reports. It was a good job, though a monotonous one. Caesar was no dissident.

But in March 2011, Syria’s social fabric started to fray as the Arab Spring reached Damascus, and citizens began demanding reform and even revolution. The volume of calls to Caesar’s office—requesting photographic documentation—increased rapidly. Though he and his team were accustomed to driving out to crime scenes of all kinds, they soon found themselves repeatedly returning to Mezzeh and Tishreen. Like other such sites, these military hospitals became a dumping ground for those held by Syria’s ruthless spy agencies, including Branch 215 (a Damascus sector of military intelligence) and Jawiyya (the Air Force Intelligence branch).

Caesar and his squad, using Fuji and Nikon digital cameras, would painstakingly photograph the remains of people from all walks of life: men, women, young, old, Sunnis, Christians. The security forces responsible for the killings even went after Alawites, the close-knit Islamic sect to which Assad and the rest of the ruling elite belong. (Some of the bodies, as is evident in Caesar’s photographs, arrived with what turned out to be an ironic marking—a tattoo of Bashar al-Assad’s face.) While a number of the victims, according to Syrian opposition figures, might be considered anti-regime activists, the rest simply found themselves for whatever reason on the wrong side of the regime. In many cases, sources say, individuals had merely been detained at checkpoints by guards who found their loyalties suspect based on their religion, where they lived, or even their demeanor.

These unfortunates may have lived and died in different ways, but they were bound in death by coded numerals scribbled on their skin with markers, or on scraps of paper affixed to their bodies. The first set of numbers (for example, 2935 in the photographs at bottom) would denote a prisoner’s I.D. The second (for example, 215) would refer to the intelligence branch responsible for his or her death. Underneath these figures, in many cases, would appear the hospital case-file number (for example, 2487/B). Such documentation is reminiscent of schemes used by the Nazis during World War II and is eerily reminiscent of an image bank collected by the Khmer Rouge during their Cambodian reign of terror in the 1970s.

According to David Crane, a war-crimes prosecutor who helped put Liberian strongman Charles Taylor away for half a century, the system of organizing and recording the dead served three ends: to satisfy Syrian authorities that executions were carried out; to ensure that no one was improperly discharged; and to allow military judges to represent to families—by producing official-seeming death certificates—that their loved ones had died of natural causes. In many ways, these facilities were ideal for hiding “unwanted” individuals, alive or dead. As part of the Ministry of Defense, the hospitals were already fortified, which made it easy to shield their inner workings and keep away families who might come looking for missing relatives. “These hospitals provide cover for the crimes of the regime,” said Nawaf Fares, a top Syrian diplomat and tribal leader who defected in 2012. “People are brought into the hospitals, and killed, and their deaths are papered over with documentation.” When I asked him, during a recent interview in Dubai, Why involve the hospitals at all?, he leaned forward and said, “Because mass graves have a bad reputation.”

The rationale is coldly sinister: no body, no evidence; no evidence, no crime.