Iran Daily, June 14: Rouhani Walks Tightrope in Nuclear Talks, Admits He Can Do Little on Homefront 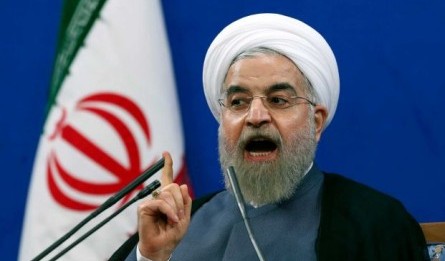 UPDATE 0930 GMT: Speaking in northeastern Iran, President Rouhani has pressed critics of the nuclear negotiations by claiming that they are causing economic damage.

Rouhani said those who did not back the talks and “supposed sanctions are unimportant are not aware of the people’s pockets”. He claimed they were wealthy “ill-wishers who imported goods from abroad ten times as expensive as the normal price”.

Hardliners have said that Rouhani is exaggerating the effect of sanctions to cover up his weakness in the negotiations. On Friday, the Prayer Leader in Mashhad, Ayatollah Alamalhoda, said:

There is no doubt that sanctions have taken their toll on us and caused problems; however, we need to ask: have they made us desperate? Have we reached a point that the key to all our problems is the lifting of sanctions? It is definitely not so….

It is now 35 years and three months that Iran is under sanctions and during this time it has made the highest level of progress in the fields of science and technology.

ORIGINAL ENTRY: Walking a tightrope as Iran seeks a nuclear deal with the 5+1 Powers, President Rouhani has said he is hopeful for a resolution, while admitting that there is little he can do on domestic issues amid the negotiations.

In a lengthy press conference for the second anniversary of his election, Rouhani took on hardline critics of the talks, which face a deadline of June 30 for a comprehensive agreement:

I'm not anxious (like #IranTalks opponents) but hopeful. Positive impact of #IranDeal will lead opponents to change their minds #RouhaniLive

At the same time, he guarded himself against that criticism by repeating Tehran’s “red lines”, notably over the issue of inspections of military sites that has arisen since a nuclear framework was agreed on April 2: “Iran will absolutely not allow its national secrets to fall into the hands of foreigners through the Additional Protocol [to the Nuclear Non-Proliferation Treaty] or any other means.”

The Rouhani Government has said that Iran will formally adhere to the Additional Protocol for the first time in an agreement. However, last month International Atomic Energy Agency head Yukiya Amano said that the IAEA must have unrestricted access to military as well as nuclear sites, setting off vehement objections from high-level Iranian officials.

Behind the rhetoric, there have been signs in the past week — including statements from Russian Foreign Minister Sergei Lavrov and Amano — that there may be a compromise with access to some but not all military sites.

In another sign of compromise, Rouhani said that he expected relief from US, European Union, and UN sanctions within a “couple of months” after the agreement was signed.

After the presentation of the framework in April, Iran put out the message that sanctions would be removed immediately upon signature, while the US and allies said that the condition of IAEA verification of Iranian compliance could take months.

Rouhani said on Saturday that reports of a one-year wait for sanctions relief were “totally untrue”: “It might be one month. We are still discussing.”

The President added to the hints from other Iranian officials, including the lead nuclear negotiator Abbas Araqchi, that the June 30 deadline for agreement might be extended: “We will not waste time, but we should also not restrict ourselves to a specific deadline,” he said.

While sounding cautiously hopeful on the nuclear talks, Rouhani’s statements on domestic issues verged on an admission that he can do little.

Asked about his failure to deliver on promises to free political and social space — from the release of political prisoners to the lifting of a ban on women in sports stadiums — the President said there was “little opening” because of “pressure groups”. He added, “Socially and politically, things have changed in the past 22 months, but changes cannot take place overnight. We shouldn’t lose hope.”

However, pressed on the specific topic of a ban on the appearance or even the name of former President Mohammad Khatami in Iranian media, Rouhani did not engage with the issue. Instead, he denied that there was any restriction and said that those who had mentioned it were “liars”.

The President also sidestepped questions on political detainees. Twice asked about Washington Post correspondent Jason Rezaian, who was arrested last July and has appeared twice in court on espionage charges, he gave no response.

Rouhani preferred to put out assertions of further progress in checking the economic downturn under his predecessor Mahmoud Ahmadinejad, when price increases had reached 45%: “We need to have one digit inflation, so the government is trying to reduce it.”