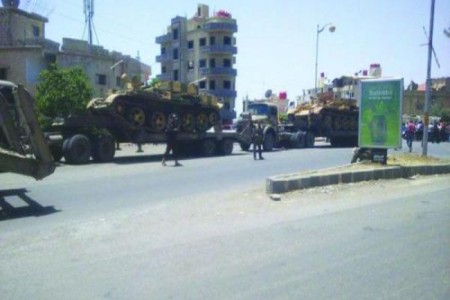 Druze groups are preventing the Syrian military from moving tanks and weapons out of Suweida Province in southeastern Syria, according to opposition activists.

The activists told Syria Direct that armed men of the “Sheikhs of Dignity” movement stopped a column of tanks from the 15th Division 15 on the highway to Damascus. The armored column was transporting “heavy weaponry”.

Noura al-Basha, a Druze member of the Syrian Revolution Coordinators Union in Suwaida, said, “A number of the regime soldiers fled, and the others were captured by the Sheikhs of Dignity supporters, who forced the column to return to their bases in Suwaida Province.”

Reports circulated over the weekend that the Syrian military, facing a series of defeats and challenges by rebels and the Islamic State around the country, were shifting forces and weapons out of Suweida.

After the incident, Sheikh Waheed al-Balaus, the leader of the Sheikhs of Dignity movement, said in a speech, “We will not accept, under any pretense, that the army’s equipment be moved from its [current] locations.”

The Druze — a religious group primarily living in Syria, Lebanon, and Israel — are angered that the Assad regime has been moving “When most of the money and hard currency was removed from the Central Bank [in Suwayda] we didn’t move…we warned, and are still warning that the province is being emptied of grain…but for the province to be emptied of weapons….No, a thousand times no!”

Activists say Suweida’s leaders are worried that the removal of weapons leaves them vulnerable to the entry of foreign forces into the area. Rebels have been moving across southern Syria along the Jordanian border, while the Islamic State has also threatened incursions into the province.

EA sources report that communities in Suweida have been angered by regime attempts at forced conscription of young men. Claims circulated earlier this year of Druze protests, including stone-throwing and closure of roads with burning tires, against the conscriptions.

Hafiz Qarqut, a writer and political analyst, supported the claims, “Luna a-Shibl, who works as a media consultant for Assad and is from Suwayda, met with the Druze after the rebels captured Busra a-Sham”, a historic town near Suwaida, taken by rebels in April. The Assad advisor allegedly threatened that the regime would support the Islamic State’s entry into Suwayda “if the province avoided sending young men for military service”.

Soon after the meeting, groups affiliated with the Islamic State began attacks near the Khalkhala airport in northern Suwayda Province.