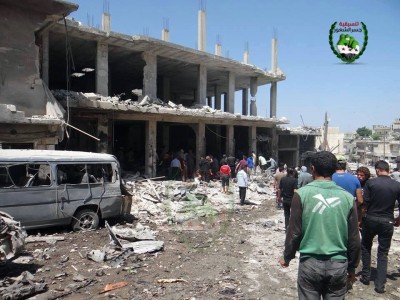 At least 109 people were killed on Monday as regime warplanes barrel-bombed the country, particularly Idlib Province in northwest Syria.

The Local Coordination Committees reported that 71 of the deaths were in Idlib and 21 in neighboring Aleppo Province. At least 60 of the victims were reportedly in the Idlib village of Janoudiyeh.

A spokesman from the rebel fashion Ahrar a-Sham claimed that vacuum missiles hit Janoudiyeh’s main square. Photos and names of victims have been posted on Facebook.

Jaish al-Fatah said on Monday that it had offered President Assad a deal over the weekend of no attacks on two regime enclaves north of Idlib city, in return for a halt to the airstrikes. So far, Jaish al-Fatah has not launched assaults on Kafraya and al-Fu’ah; however, the Free Syrian Army has shelled the enclaves of Nubl and Zahraa, north of Aleppo city, in retaliation for aerial attacks in that province.

The regime is persisting in its attacks on Aleppo. Syrian civil defense officials said at least 20 people were killed and around 40 have been injured on Tuesday, as four neighborhoods were targeted with eight barrel bombs.

Rescue and fire-fighting operations after the strikes:

A man sits in front of his destroyed home: 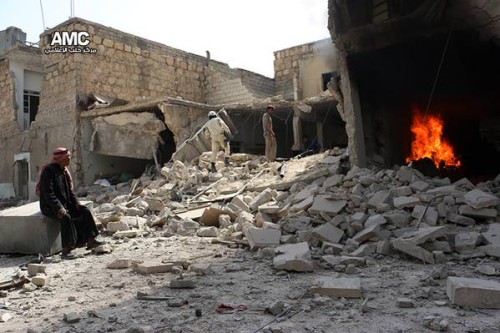 Rebels Capture Brigade 52 Base Within Hours

The Southern Front rebel coalition has captured the regime’s Brigade 52 base (see map) in Daraa Province in southern Syria, only hours after beginning a ground assault.

#BREAKING: the #FSA #Southern_Front announces the full liberation of #Brigade52 in #Daraa #Syria

The rebels advanced on Tuesday morning, following mortar and rocket attacks on Monday. Supported by multiple-rocket launchers and artillery, they rapidly moved into a nearby village before taking battalion positions within the base.

The Southern Front commander who planned the offensive, Colonel Rifai Filipe, was among 11 rebels killed in the fighting.

The Syrian Army’s base commander was also among the slain. Local sources say rebels have already confirmed 70 dead regime troops and are still counting. Hundreds tried to flee to Druze areas in Suweida Province, with many killed on roads as they retreated. Many officers are reportedly travelling to Damascus, as the army tries to withdraw equipment from Suweida for defense.

A Druze activist, Noura al-Basha, described the scene at the Suweida National Hospital:

I saw a large number of regime soldiers dead and wounded from the battles going on at Liwa [Brigade] 52. The scene was confusing, blood covered the soldiers’ clothing and they were in a state of terror and panic.

What caught my attention inside the hospital was that the Syrian soldiers were lying by the hospital doors. No one was tending to them or even paying them attention. Their Iranian counterparts were receiving care.

The hospital staff expelled some patients from the hospital because they couldn’t absorb the sheer number of dead and wounded.

Storming of the barricades:

A firefight inside the base, with rebels rescuing a wounded comrade:

Inside the base after victory:

Touring the base (Warning — Images of bodies of regime troops): 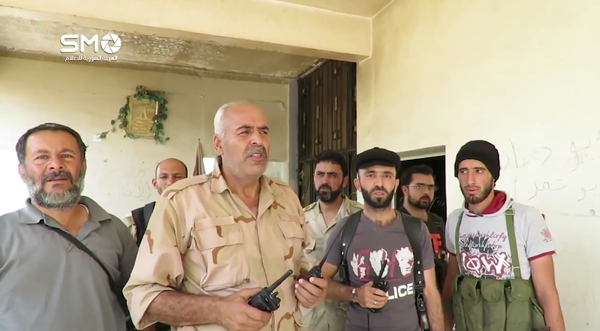 Rebels say the base is the second-largest of its kind in Syria, covering 1200 hectares and connecting Daraa and Suweida Provinces.

A scene from Daraa Province in southern Syria — a paramedic finds his brother, a Free Syrian fighter, has been killed:

The Judiciary Council of rebel-controlled East Ghouta has called on Jaish al-Islam, the leading faction in the area, to hand over files needed to render judgments.

“Jaish al-Islam stipulated that we issue all judgments at once, and we requested they stop giving us incomplete casework, so we are asking Jaish al-Islam to finish giving us the files,” said Khalid Tafour, the Council’s head judge.

On Sunday, a leaked video showed a Jaish al-Islam leader insinuating that Tafour has been procrastinating in delivering judgments in East Ghouta, east of Damascus.

Tafour said he had requested files over “the case of Jaish al-Umma”, a rebel faction whose members were arrested by Jaish al-Islam last year.

He also spoke about the abduction of the “Douma 4″ — Razan Zaitouneh, prominent in the Local Coordination Committees; her husband Wael Hamadeh, and two other activists — whose whereabouts are still unknown. Jaish al-Islam has been accused of hindering the investigation and even of complicity in the kidnappings.

“The investigations commission for Razan Zeitounah is still ongoing…and some brigades are cooperating while others are hampering it,” Tafour said.

Rebels Begin Attack on Brigade 52 Base in Daraa Province

The Southern Front rebel bloc has begun an assault on the regime’s Brigade 52 base near Hirak in Daraa Province in southern Syria.

The base was shelled with mortars and rockets on Monday, and this morning ground attacks, including the claimed destruction of tanks by a vehicle-borne bomb, are reported.

Rebels say they have taken the village Mleihat Gharbiyyeh, northeast of the base (see map), this morning.

The Syrian military says it is countering with airstrikes.

The base is near the frontline in Daraa, between regime-controlled town of Ghazaleh and rebel-held Hirak.

Rebels moving towards the base:

Amid reports of the Syrian military’s problems in obtaining personnel, including forced conscription, Prime Minister Wael al-Halqi has announced a “monthly award” of SYP 10,000 (about $33) for soldiers in active duty.

Al-Halqi told the People’s Assembly that distribution of the money will begin in early July.

The military is said to have seized young men, threatening detention if they did not join the army, in the face of advances by both rebels and the Islamic State. Forced conscription has been reported from Damascus to Deir ez-Zor Province in the northeast to Suweida Province near the Jordanian border.