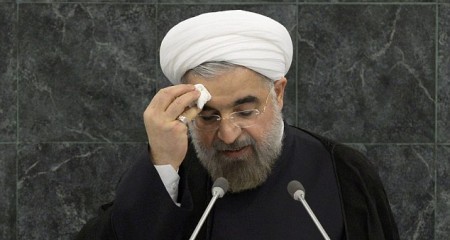 Fighting within Iran’s regime has continued over nuclear talks with the 5+1 Powers, with the Supreme Leader and President Rouhani failing to quell critics.

As Iran and the 5+1 draft the final text of a comprehensive agreement, hardliners within Parliament have challenged Iranian Foreign Minister Mohammad Javad Zarif and the negotiating team. On May 24, tension spiked when some MPs shouted at Zarif during a closed-door session, accusing him of weakness and failure to defend Iran’s “red lines” in the talks.

The Supreme Leader tried to check the hardliners — many of whom are linked to former President Mahmoud Ahmadinjad — last Wednesday with support of the negotiators: “Our brothers are working hard. They’re really sweating and working on all these fields.”

With that backing, Rouhani said on Saturday:

If a group wants to harm the people’s hope for the future, it will not be tolerated….Why are certain people unwilling to see people become happy? We should be united and have solidarity on this issue.

Who has the right to talk to our diplomatic commander [Zarif] in an impolite tone? Where did that impoliteness come from?

However, the editor of the hardline Kayhan newspaper has not relented. Hossein Shariatmadari said, “Dr. Rouhani’s attack on critics is to cover up the [Government’s] shortcomings and failures.”

Shariatmadari focused on the failure to produce a “fact sheet” to counter the US version produced after an April 2 nuclear framework was agreed in Switzerland. “Critics want an explanation about the ‘Lausanne agreement’….Requests have been repeatedly declared to explain this data….What is your interpretation of the mentioned agreement?”

Former President Hashemi Rafsanjani, a close ally of Rouhani and head of the Expediency Council, countered, “Certain groups prefer problems to remain because resolution of issues may endanger their interests.”

Iran and the 5+1 (US, Britain, France, Germany, Russia, and China) continue drafting of the final text in Vienna on Thursday.

Iranian media report that two officers have been killed in fighting amid the Islamic State’s capture of Ramadi, the capital of Anbar Province in Iraq.

Saeed Qarloqi was killed on May 27, while Jassem Nouri, a commander in the 1980s war with Iraq who also fought recently in Syria, was also slain.

Tehran has promised increased military support for Iraqi forces and Shia militias to retake Ramadi, taken by the Islamic State in mid-May.

Laham’s meeting this morning with President Hassan Rouhani is framed, “Iranian Government and People Will Stay by the Side of Syria“. Iran’s State news agency IRNA adds Rouhani’s comment, “After four years of resistance and struggle the enemies of Syria have come to realize that their dreams of gaining dominance over Damascus in just a few months were hollow ones.”

An interview with the Supreme Leader’s top aide, Ali Akbar Velayati, on Iranian TV is headlined, “Terrorists Will Fail to Achieve Their Goals in Syria”. SANA says Velayati praised “the strong resistance put up…by the Syrian government and people” and “lauded the Syrian leadership’s efforts in confronting terrorism and the American plots against the region”.

Velayati also met Syrian Speaker al-Laham on Monday, saying that regional crises are “a pervasive plot by the US, the Zionists and reactionaries”.

None of the stories refers to the key issues between Damascus and Tehran. The Assad regime is still pursuing a $4 billion line of credit, as $3.6 billion from July 2013 runs out, but Iran has held out against the request for months. There are also signs that the Islamic Republic has pulled back its military support, withdrawing forces from the north as rebels advanced and concentrating on areas around Damascus.