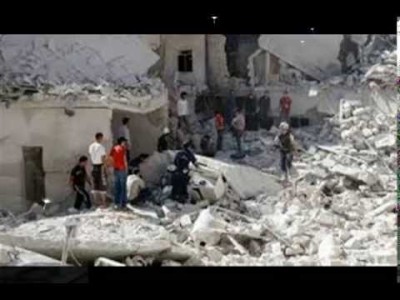 PHOTO: Damage in Tel Rifaat in Aleppo Province from a regime airstrike

Another 100 people were killed in Syria on Wednesday amid intensive regime bombing and shelling, mainly in the north of the country.

The Local Coordination Committees say 64 of the deaths were in Aleppo Province. Some of the casualties were in Tel Rifaat, near the frontline of the Islamic State’s offensive on rebels; however, some were in a section of the Islamic State-controlled al-Bab, north of Aleppo city.

The LCC also reported that seven people were executed by the Islamic State in Deir Ez Zor Province in eastern Syria.

Among Wednesday’s victims were 17 children and five women.

The Syrian air force has stepped up attacks in the north and northwest since the loss of almost all of Idlib Province this spring to rebels. So far, the assaults have led to no recovery of territory on the ground, but the strikes on towns such as Tel Rifaat and Mare’ in the past week have provided de facto assistance to the Islamic State’s offensive against rebels.

Aftermath of an attack on Tel Rifaat on Wednesday:

Two boys are rescued from an attack in the Marjeh section of Aleppo Province on Thursday:

None of the strikes were near the areas of Aleppo Province where the Islamic State is attacking rebels.

Human Rights Watch has issued a new report on the Assad regime’s chemical weapons attacks, this time detailing likely assaults with chlorine gas in Idlib Province in northwest Syria in early May.

HRW details barrel-bomb attacks on May 2 and 7 on villages near Idlib city, based on interviews local doctors and first aid responders, photographs, and videos. The strikes on Nairab, Saraqeb, and Kafr Batikh killed two people and wounded 127.

The regime has carried out its second high-profile PR trip in two days, trying to counter defeats by rebels and the Islamic State, with the Defense Minister visiting troops in Homs Province in central Syria.

Syria will defeat Takfiri terrorists by the heroism of our army soldiers who offer precious sacrifices to preserve the Homeland’s dignity and honor….The armed forces will remain at a high moral spirit and combatant readiness to defeat terrorism and its supporters.

The visit comes two weeks after the Islamic State captured the historic city of Palmyra in eastern Homs Province.

On Tuesday, the Army Chief of Staff, Ali Abdullah Ayoub, was photographed with troops in Idlib and Hama Provinces, following the rebels’ capture of almost all of Idlib and move into northern Hama.

Jabhat al-Nusra Leader: We Are Now Fighting the Islamic State

The leader of Jabhat al-Nusra has said in a televised interview that the Islamist faction is now fighting the Islamic State.

There is no solution between us and them, or in the foreseeable future.

We hope they repent to God and return to their senses … if not, then there is nothing but fighting between us.

He said, “They did not commit to the orders we had…including not blowing up markets or killing people in mosques.”

Jabhat al-Nusra did not join rebels in fighting the Islamic State, after battles began in January 2014, instead trying to broker a ceasefire. However, in recent months, there have been signs of an alliance with rebels as they try to clear Islamic State units out of parts of Syria.

Al Jazeera broadcast al-Jolani’s comments in the second part of a two-hour program. The first hour was shown last week.

The Islamic State has advanced in its offensive to take Hasakah city in eastern Syria from regime forces.

The militants have taken al-Dawoudiya village, which has been disputed throughout the offensive, have seized a power plant, and have moved back into parts of the al-Adham Prison, reportedly after one of several suicide bombs used on the outskirts of Hasakah. They are challenging for control of the Panorama Roundabout, one of the main entry points into the city.

The Islamic State has been in the southeastern part of the Hasakah during its assaults. It is unclear if the militants have moved back into the city in their latest attacks.

Pro-Assad sites say the Syrian army and Assyrian militia have sent reinforcements to hold back the advance.