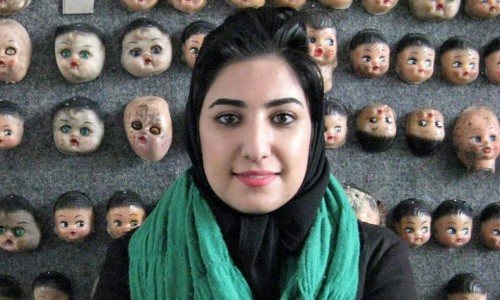 During his press conference on Saturday, President Rouhani admitted that there had been “little opening” in the promises of his 2013 campaign to free up political social space, blaming “pressure groups”. He maintained, “Socially and politically, things have changed in the past 22 months, but changes cannot take place overnight. We shouldn’t lose hope.”

Saeed Kamali Dehghan of The Guardian puts that hope in context by profiling three recent cases of the many artists and activists imprisoned by the regime:

Iran’s judiciary has unleashed a wave of heavy jail sentences against artists and activists in what appears to be an attempt to send a warning to those who dare to express dissent.

As the country’s moderate president, Hassan Rouhani, tries to improve relations with the west, the conservative-dominated judiciary, which acts independently of his government, is demonstrating the limits of his power internally.

Those targeted recently include film-maker, writer and TV producer Mostafa Azizi, who has been sentenced to eight years in prison, painter Atena Farghadani, sentenced to 12 years, and anti-death-penalty activist Atena Daemi, sentenced to 14 years.

All three have been found guilty of insulting Iran’s Supreme Leader, Ayatollah Ali Khamenei, through their activities on social networking sites such as Facebook. They have also been convicted of other vague charges, which are often used against activists held on political grounds, including “spreading propaganda against the ruling establishment”.

Recent harsh sentences follow a familiar pattern in Iran’s judicial system whose independence and impartiality have been repeatedly questioned by human rights groups. A number of judges, who are believed to be acting under the influence of the country’s intelligence apparatus, are notorious for holding trials behind closed doors and without proper legal procedures.

One of the convicts, Azizi, a former employee of Iran’s state TV, was arrested in February after returning to Iran from Canada, his country of residence, to take care of his elderly, ailing father. According to his son, Arash Azizi, the film-maker was on Monday given five years for “gathering and colluding against the national security”, two years for insulting Khamenei and a further year for his activities online. The head of the Iranian judiciary is appointed directly by Khamenei.

Azizi has lodged an appeal against his conviction. “My father had heard numerously from Rouhani that it is safe for expatriates to return home,” Arash Azizi told the Guardian. “He was encouraged to go back and he was under impression that there is a new opportunity in Iran for people like him to work.” In jail, Azizi is held along with Somali pirates.

Farghadani, 29, who was put on trial last month in connection with her activism such as meeting with the families of political prisoners as well as her art, has recently been given 12 years and nine months in jail. One evidence used against her in court was a cartoon she drew and posted online that depicted a group of Iranian parliamentarians with faces of monkeys and donkeys. Cartoonists across the globe have since launched a campaign #Draw4Atena, drawing cartoons in her solidarity.

Atena Daemi, who has campaigned against capital punishment in Iran by participating in peaceful protests, distributing anti-death-penalty pamphlets and being active on Facebook and Twitter, now has to serve at least seven out of her total 14 years in jail under Iranian law.

On Tuesday, Ahmed Shaheed, the UN special rapporteur for the situation of human rights in Iran, expressed concern about the heavy sentences and urged the Iranian authorities to reconsider the cases.

“I am deeply concerned by the prosecution of these individuals for what appears to be a legitimate exercise of internationally protected rights to expression and assembly,” he told the Guardian.

“The arrest, prosecution, and conviction of these authors, artists, and human rights advocates for violating vaguely worded national security laws demonstrates that the environment in Iran is still not yet conducive for addressing certain issues of concern raised by the international community, and still not yet amenable to the demands of thousands of Iranians that voted for a new approach during the 2013 presidential elections.”

Although Rouhani cannot directly interfere in judicial matters, he can use his position as the public face of the country to defend those jailed unjustly, which he has not done publicly so far. Focused on resolving the nuclear issue, critics say Rouhani has overlooked ongoing, if not increasing, violations at home.

At least four other social and human rights activists have reportedly also been given recent harsh convictions, including Omid Alishenas, sentenced to 10 years and Asou Rostami, Saeed Hosseinzadeh, and Ali Nouri, each sentenced to seven years.