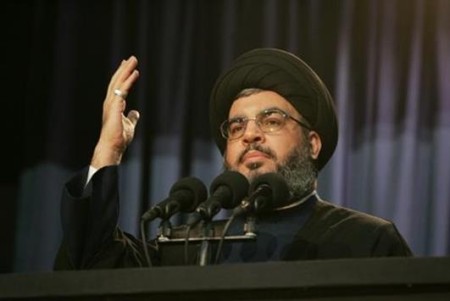 Hezbollah leader Hassan Nasrallah has called for a popular mobilization among his supporters to win an “existential battle” in Syria.

According to the pro-Hezbollah as-Safir newspaper, Nasrallah said in a private speech to wounded fighters on Friday:

The resistance is fighting an existential battle par excellence.

Had we not fought in Aleppo, Homs and Damascus, we would have fought in Baalbek, Hermel, al-Ghazieh, Sidon, Tyre, Nabatieh, and other Lebanese villages, towns and cities.

He said Hezbollah had no choice but to seek the defeat of the “takfiri” groups in the region, or else face slaughter, shame, rape, and enslavement:

Even if half of us are martyred in this war for the other half to live in dignity, glory and honor… this would be the best choice. Half of us will not be martyred, God willing, but the situation requires great sacrifice because the attack is huge.

Hezbollah has been pursuing an offensive for two weeks in the Qalamoun region against Syria’s rebels, seeking a buffer zone along the Lebanese border.

Nasrallah put the fight in a regional context, saying Saudi Arabia, Turkey, and Qatar — all of whom have stepped up weapons and military equipment to rebels, bolstering their successes throughout Syria, since the start of the year — have resolved their internal conflicts and joined forces in the battle against Hezbollah.

“If we were to be determined and responsible enough, we will beat them and victory will be our ally,” he said, adding:

It is the time for mobilization, and everyone can contribute, even with his voice.

Everyone who enjoys a reputation of integrity should contribute to this mobilization. The religious scholars should speak, whoever has lost a martyr should speak….Even you, my wounded brothers, you have healthy tongues, so speak….

I say that we might fight everywhere. We will not remain silent with anyone anymore, and we have strong cards that we haven’t yet used.

If we keep working with this momentum, like we did in Qalamoun…, the divine promise o victory is certainly guaranteed.