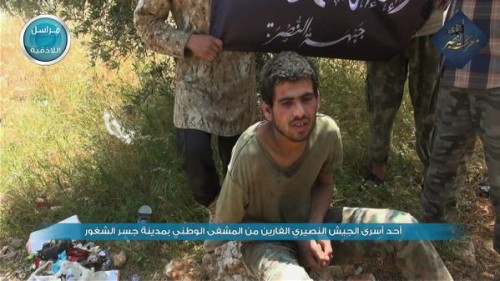 The battle is continuing over the fate of about 200 Syrian soldiers who fled the National Hospital in Jisr al-Shughour, surrounded by rebels after the fall of the city on April 26.

Journalist Hadi al-Abdallah, who has been on the frontlines of the rebel offensive across Idlib offensive in northwest Syria, posted a 15-minute video which claimed to show the bodies of about 120 slain soldiers — activists have also posted screenshots of each casualty. Rebels had earlier claimed the capture of at least 65 of President Assad’s men.

If both claims are true — as well as image of slain and of the capture of groups of escapees — no more than 20 Syrian troops made it safely to reach regime lines about 2.5 km (1.5 miles) from Jisr al-Shughour.

The pro-opposition Local Coordination Committees said, from an “informed source”, that 70 troops had been killed, 85 captured, and others were missing.

Syrian State media countered with statements and a video interview from Colonel Mahmoud Sabha, described as the “commander” of the men inside the hospital, and another soldier.

The article did not give a number for those who survived the rebel siege and attacks; however, a website posted the photographs of about 15 men, most being treated for injuries. A tribute video on State media, accompanied by martial music, also showed a few of the troops.

A pro-Assad outlet raised its claim of successful escapees to 127, of about 180 soldiers that it said remained in the hospital. However, its editor continued to post only 14 names.

Video of survivors taken to hospital in Latakia:

Regime outlets have acknowledged that three Generals and one Colonel are among those who have been killed. Among the dead shown in the Hadi Abdallah video of about 120 slain, at the 12:47 mark, is a two-star general.

Instead of providing further information on the soldiers, State media is now featuring a photo of four civilians — a woman and three girlss — whom it claims were able to flee the hospital. It also is claiming, from a “military source”, that “more than 300 terrorists were killed and hundreds of others were injured” during raids since Friday.

The Syrian troops, short of food and water and living amid bodies of colleagues, made a break from the hospital on Friday after they feared that an underground bomb would blow up the building.

President Assad pledged more than two weeks to rescue the men, declaring that the success would show the regime’s triumph over recent rebel advances. However, his forces had made little progress on the outskirts of Jisr al-Shughour.

The city is important because it lies on the highway between Aleppo and Latakia on the Mediterranean. With its capture and that of the provincial capital Idlib and nearby military camps, rebels hold more than 95% of the province.

Reports are circulating of an imminent rebel offensive south of Aleppo, threatening the ring road.

Addressing members on Sunday, Hezbollah leader Hassan Nasrallah has pointed to a fight for the Lebanese border town of Arsal.

Hezbollah is currently pursuing an offensive inside Syria in the Qalamoun region, and Nasrallah spoke on Friday about a “popular mobilization” for an “existential battle” in the Syrian conflict.

Most of Nasrallah’s speech on Sunday was about Israel. However, he warned the Lebanese Government that it must resolve the situation in Arsal in the Bekaa Valley: “our people in Bekaa will keep no Takfiri militant alive”.

Arsal, with a mainly-Sunni population, has long been a base for Syrian fighters opposed to President Assad. Both Jabhat al-Nusra and Islamic State have also clashed with Lebanese forces in the town, and the groups briefly took control of areas in August 2014, with scores of casualties among both the Lebanese army and the militants. More than 30 Lebanese security forces were abducted, and four were subsequently executed.

The Islamic State has released several photographs of regime troops whom it captured in last week’s takeover of Palmyra in central Syria: 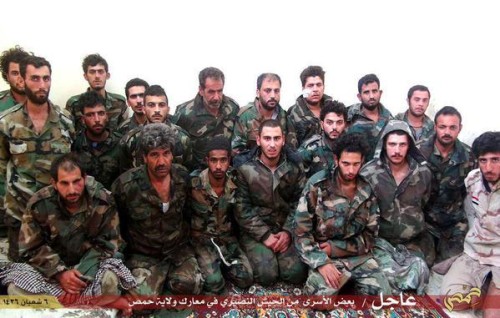 The Islamic State claimed the city, famed from Roman times, after a week-long offensive through eastern Homs Province.

Reports are circulating that a rebel underground bomb has demolished a building, killing at least 15 Syrian troops and wounded dozens of others in the Maysaloon section of Aleppo.

Claimed footage of the rebel unit involved and the destruction of the building:

Rebels have periodically set off deadly tunnel explosions underneath regime positions in the divided city, including near the historic Aleppo Citadel in the center and the Air Force Intelligence building in northwest Aleppo.

State media, quoting an unnamed military official, said the helicopter was downed by a technical problem and not by the Islamic State.

The militants have surrounded Kweires for months.

Brigadier General Bassam Muhana al-Ali was killed by an improvised explosive device near the Damascus suburb of Adawee (see map) on Sunday morning, according to rebels and opposition outlets.

The rebel faction Ahrar al-Sham has claimed responsibility for the attack, which it said also killed seven of al-Ali’s staff. Two cars carrying the men were targeted.

Ahrar al-Sham’s footage of the operation:

A 1-minute from a spokesman for the Southern Front rebel bloc describes the organization of 31 factions and declares that it holds 65% of Daraa Province, 80% of Quneitra Province, and much of Damascus Province in southern Syria.

Most interesting may be the declaration that the Front is using military operation for a negotiated settlement: “We could put more pressure on the regime to agree with a political solution.”