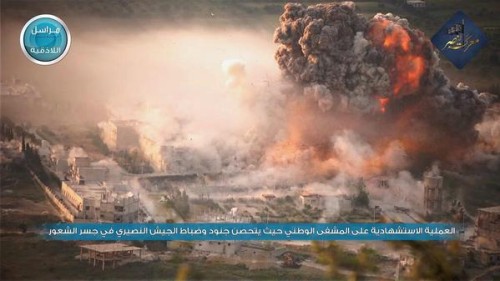 Rebels have launched another attack to end the holdout of Syrian forces at the National Hospital in Jisr al-Shughour, the key city in northwest Syria captured by the opposition on April 26.

The assault was launched by a massive vehicle-borne bomb by Jabhat al-Nusra:

#JN| After the martyrdom operation, mujahidin storm the National hospital in #Jisr_Al_Shughur & clashes are intense inside the building (1)

Footage of attacks in the area, with the vehicle bomb at 1:22:

Pro-opposition Orient News reporting near Jisr al-Shughour, with smoke from the bomb in the background:

Reports indicate Syrian warplanes have carried out of dozens of strikes on Jisr al-Shughour to check the rebel assault, while regime forces have tried to reach the city.

More than 200 Syrians reportedly took up positions in the hospital for a last stand as rebels moved through the rest of Jisr al-Shughour, on the main route between Aleppo and Latakia on the Mediterranean coast, in late April. The holdout has continued despite the rebel siege and an assault, also preceded by a large bomb at the entrance of the hospital, almost two weeks ago.

On Wednesday, in a rare public appearance, President Assad promised that Syrian forces would advance to the hospital and free the men. Pro-Assad accounts have supported his message of bravery and sacrifice with photographs of the besieged troops.

Elite Syrian troops are about three kilometers (2 miles) outside Jisr al-Shughour. Despite the claims of regime supporters, they have made only small advances towards their objective.

Pro-rebel accounts assert that high-ranking Syrian commanders and officials are among the soldiers in the hospital.

The rebel capture of Jisr al-Shughour followed victory in the provincial capital of Idlib on March 28, as part of an offensive through southern Idlib and northern Hama Provinces. The opposition is now trying to take territory south of Jisr al-Shughour, cutting off regime forces between Idlib and Latakia and advancing towards Hama city.

Turkish Prime Minister Ahmet Davutoğlu has traveled into Syria to pay an unscheduled visit to the historic tomb of Süleyman Şhah, the grandfather of the founder of the Ottoman Empire. 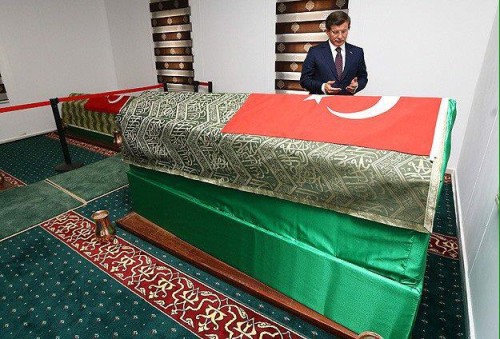 Helicopters and armored vehicles protected the Turkish convoy as Davutoğlu visited the tomb, only 250 meters from the border, near Ashme village in Aleppo Province.

The tomb was declared Turkish territory in a 1921 treaty signed with France, which then controlled Syria. In the 1970s, the Assad regime recognized Turkish sovereignty.

In February, the tomb was moved almost 40 kilometers nearer the border, because of fears that the site and the 44 Turkish soldiers on it would be overrun by the Islamic State.

Davutoğlu was accompanied by Hulusi Akar, the commander of Turkey’s Land Forces.

Syrian State media has denounced the visit as a “propaganda stunt…which happened without the Syrian government’s consent [and] is a flagrant aggression against a sovereign country which is a UN member state and is a grave violation of international laws and accords”.

A spokesman for the Jaish al-Islam rebel faction has clarified claims on Saturday that the opposition recaptured the town of Deir Salman, south of Damascus, on Saturday.

The Syrian military, alongside Hezbollah and Iranian fighters, took Deir Salman in an offensive which made limited gains earlier this year. While the regime struggled to advance farther, the takeover of the town was seen as a buffer against any drive from rebels, who had advanced in southern Syria, towards the capital.

Abdurrahman Saleh, a Jaish al-Islam spokesman, tweeted on Sunday that the rebels had carried out a raid into Deir Salman and nearby Zamanieh, killing 20 Syrian troops. He did not indicate that the attack sought the capture of the towns.

Footage of the attack: