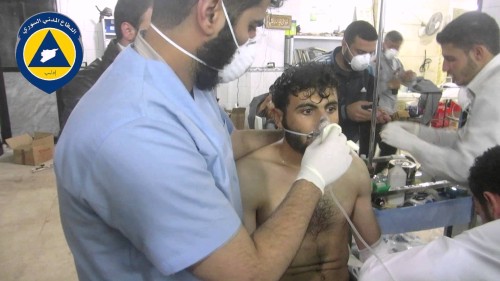 Witnesses and videos indicate that the Assad regime has renewed its chemical weapons attacks in Idlib Province in northwest Syria.

Chlorine canisters inside barrel bombs were apparently dropped on the town of Saraqeb and the village of Nayrab. Syrian Civil Defense says a child died and 10 suffered from breathing problems in Nayrab, while 75 were treated for suffocation in Saraqeb.

The attacks come six weeks after the Syrian regime unsuccessfully used chlorine to stop rebels from advancing upon and capturing the provincial capital of Idlib. At least six people were killed and more than 100 were wounded in areas such as Sarmin, southeast of Idlib city.

Treatment in Nayrab of a Syrian Civil Defense volunteer:

The attack on Saraqeb:

Children and infants suffering from effects:

The Syrian air force is trying to help regime forces hold back the continuing rebel offensive, which has captured not only the provincial capital of Idlib but also the key city of Jisr al-Shughour on the Turkish border.

South of Idlib city, the regime has been reduced to one major camp, Mastoumeh, following the loss of its camp at Qarmeed last week.

In the offensive across southern Idlib and northern Hama Provinces, regime forces continue to try and push back initial rebel gains in the al-Ghab Plain, south of Jisr al-Shughour. Fighting is reportedly concentrated around Sirmaniyah, near the vital M4 highway from southern Idlib to Latakia in western Syria on the Mediterranean.

Regime Claims Capture of Mayda’a in East Ghouta, Near Damascus

The Syrian military is claiming “full control” of the town of Mayda’a and the surrounding farms in East Ghouta, near Damascus.

The military says it has cut off the last route from Douma, a major base of rebels, towards the ad-Dumayr area, further to the northeast.

The spokesman of Jaish al-Islam, the rebel faction based in Douma, counters that opposition fighters successfully attacked regime forces:

Regime military units were ambushed in Maydaa, Senior officers were killed and the military correspondent was injured. #Jaishalislam #Syria

Audio: The Dire State of the Economy

Footage, posted on Sunday, of a rally of Free Syrian Army forces and civilians in the rebel-held area of Aleppo city:

The march was convened days after prominent Free Syrian commander Khaled al-Hayani was reportedly killed during a rebel attack on the regime-held Dawwar Shehan district.

Activists and pro-Assad outlets have al-Hayani of responsibility for rocket attacks killing many civilians in regime-held parts of the divided city.

Photographs are being posted that indicate a closer working relationship between Jaish al-Islam and Ahrar al-Islam, the two largest factions in the Islamic Front bloc, amid a recent high-level meeting in Turkey.

Jaish al-Islam leader Zahran Alloush crossed Syria from his base in the Damascus suburb of Douma to attend. He is third from left in the photo, while Ahrar al-Sham head Abu Jaber is second from right: 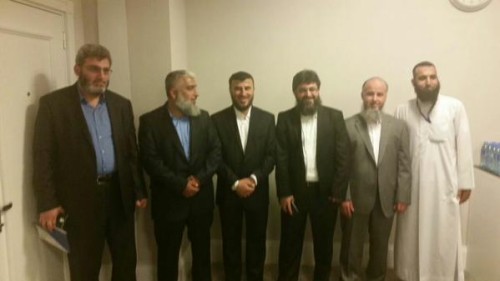 Footage of the aftermath of a regime barrel bomb that hit a kindergarten in Aleppo, reportedly killing a dozen people, including children:

Meanwhile, State news agency SANA, citing officials of the Health Department, says 14 people were killed and about 60 injured by rebel attacks in the divided city on Saturday.

After a reported attack on the Yarmouk section of southern Damascus early Saturday, the UN relief agency assisting Palestinians across the Middle East has called on the Assad regime to refrain from using explosives in populated areas, “including airborne weapons, whose indiscriminate effects expose civilians to imminent danger and suffering”.

The UN Relief and Works Agency (UNRWA) said it is increasingly alarmed about the safety of up to 18,000 civilians — mainly displaced Palestinians — in Yarmouk, amid the reports of armed clashes, use of heavy weapons, and airstrikes.

There has been protracted fighting in Yarmouk since the Islamic State entered the camp at the end of March. At one point the militants occupied about 60% of the area before they were pushed back by a combination of Palestinian groups — some allied with the regime, some with the opposition — and rebels. Throughout the conflict, the Assad regime has been accused of airstrikes with barrel bombs and shelling.

Last Tuesday, UN Secretary Ban Ki-moon condemned the shelling and aerial bombardment despite assurances from the Assad regime that the camp would not be attacked while civilians remained inside. He urged “all parties to stop the violence so as to grant secure and sustained humanitarian access to civilians inside the camp”.

Yarmouk had a pre-conflict population of up to 200,000 but the large majority of civilians fled amid fighting and a Syrian military siege from July 2012. Thousands more have reportedly been able to evacuate to nearby Damascus suburbs amid the Islamic State’s entry and latest clashes.