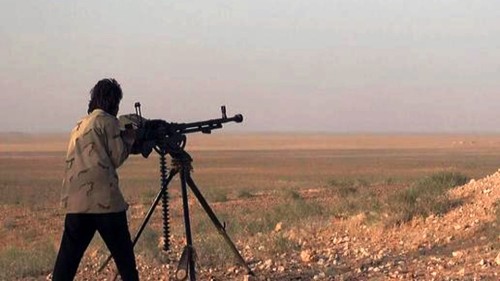 PHOTO: Islamic State fighter on the road between Palmyra and Homs in central Syria

With the Islamic State’s seizure of the Assad regime’s last border post with Iraq — following the militants’ successes at Ramadi in Iraq and Palmyra in central Syria — some in the media are hail the march of the group to victory, under the headline “Islamic State Now Controls More Than 50% of Syria”.

That claim is easy enough to push aside, given that much of the “controlled” area is little-populated desert. More demanding — and more important — is the placing of the Islamic State’s advances into the context of their recent setbacks. Then there is the longer-term question, “How can you maintain power through governing, after seizing it with violence?”

I discussed the issues with Monocle 24’s The Briefing on Friday afternoon — listen from 7:25:

The biggest story in not the Islamic State’s advance — it is that the rebels have been advancing in the northwest and threatening Assad’s forces in the center and the south of Syria.

Assad is going to be defeated. Where do the Islamic State and the Kurds and the rebels stand then? Saying “the Islamic State controls 50% of Syria” is a diversion, rather than an answer to that question.

In the long run, the force that prevails in Syria will be the one that can make links with the local population and provide what they need: electricity, water, food, decent government.

I don’t that will happen in the short-term. But the hope in the long-run is that, rather than the barbarity of the Islamic State, you get an alternative which is more enlightened in the way that it deals with the Syrian people.