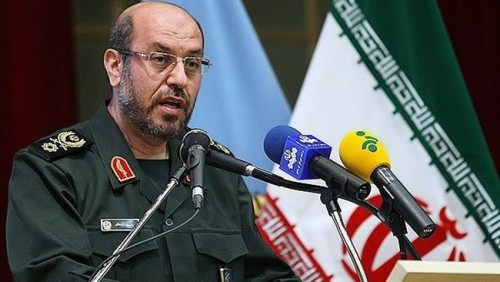 Media Behind Bars — Jason Rezaian and Tehran’s “Justice” for Journalists

As Iran steps up its political and military involvement in Iraq, Defense Minister Hossein Dehghan (pictured) has assured that the Islamic State cannot threaten Tehran.

The power of Iranian security and military forces is definitely at such a level that it can neutralize every move by the group before it starts….Security forces of Iran monitor every move by the Islamic State.

Certainly, the military and security forces of the Islamic Republic of Iran will give a crushing response to any act threatening the country’s security.

While insisting that there is no threat, Iranian officials have stepped up the announcements in the past week. The commander of Iran’s ground forces, Brigadier General Ahmad Reza Pourdastan, used missile exercises on Monday to assert that the army can “defend and establish full security along [the] borders”.

We have already announced that if the Islamic State nears [areas] about 40 kilometers from our borders and seeks to commit sabotage, Iran will definitely intervene.

All moves on the borders as well as in the region…are being monitored.

The declarations follow last week’s takeover of Ramadi, the capital of Iraq’s Anbar Province, by the Islamic State. As the city was falling, Dehghan went to Baghdad to consult with the Iraqi Government and Shia militias about a response.

Iranian commanders and specialist forces have worked with the Iraqi military and the Shia militias since the Islamic State’s rapid advance across northern and eastern Iraq last June. They were reportedly significant in the checking of that offensive and in the reclaiming of some territory in northern Iraq, including last month’s success in Tikrit.

Last week, US defense officials said Iranian forces, artillery, and surveillance drones are involved in the campaign to regain the Baiji oil refinery, 130 miles north of Baghdad, from the militants.

On Monday, General Qassem Soleimani — the head of Iran’s elite Qods Force and leader of the Iranian military intervention in Iraq — said, “We have a religious duty to support [the Iraqis]. But there is another important reason: this serves our national interest.”

He said Iran’s officials and armed forces would ensure that Iraq “contained the disease” of the Islamic State “so it does not spread to our country”.

Iranian painter and women’s rights campaigner Atena Farghadani has been sentenced to 14 years in prison.

Farghadani was given the term on Thursday for propaganda against the regime, insulting members of Parliament, and insulting the Supreme Leader. She was arrested in November after she posted a cartoon on Facebook that mocked politicians who supported an anti-contraception bill that also made voluntary sterlization a criminal offense.

The artist-activist was released on bail in January, but quickly re-arrested after she spoke to the media about her incarceration and posted a video on YouTube about prison conditions.

Fargahdani was also charged with “gathering and colluding with anti-revolutionary individuals and deviant sects” over an art exhibition, Parandegan-e Khak (Birds of Earth), commemorating those killed in the crackdown on mass protests after the disputed 2009 Presidential election.

Foreign Ministry spokeswoman Marzieh Afkham has criticized statements by US officials about the trial of Iranian-American journalist Jason Rezaian.

On Tuesday, Rezaian attended the first hearing in his closed-door trial for espionage and propaganda against the state. The Washington Post’s Tehran correspondent, seized on July 22, was only allowed one brief visit with his court-appointed lawyer before this week.

The spokeswoman stressed the independence of the Iranian judiciary and said “bias, prejudgments, and predictions have no room in judicial affairs”.