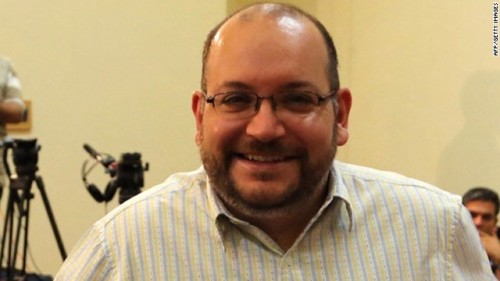 Despite a closed-door hearing and a formal ban on reporting, some details have come out in the Iranian media about the trial of Iranian-American journalist Jason Rezaian.

Rezaian, the Tehran correspondent of The Washington Post, was brought to Branch 15 of the Revolutionary Court after 10 months in detention. He accompanied only by his court-appointed lawyer. His mother and wife, fellow journalist Yeganeh Salehi — also facing charges and bailed from prison in October — were barred from the hearing.

Iranian Students News Agency (ISNA) confirmed that Rezaian’s lawyer, Leila Ehsan, was present at the hearing’s first session. The indictment, which includes a charge of espionage, was read out before the court.

Judge Abolghassem Salavati, known as the “Judge of Death” for his lengthy sentences, read out two charges against Rezaian: spying through gathering classified information and making this available to a hostile government, and propaganda against the regime.

Answering Salavati’s questions — including whether he had contacts with officials at the US Consulate in Dubai — Rezaian said, through a translator, “I am only a reporter. All my actions have been as a reporter and they have been legal.”

Salavati then read out a translation of a letter to President Obama, in which Rezaian — a reporter in Tehran since 2008 — supposedly claimed, “In Iran, I am in contact with [people] from simple workers to influential mullahs.”

The judge specifically asked Rezaian about his relationship with Lara Setrakian, an Armenian-American journalist who reported from Dubai for US media including ABC and Bloomberg and who returned to the US to found the website Syria Deeply. Rezaian replied, “We are both reporters and this is our relationship.”

However, this was enough for Salavati to effectively condemn the defendant. The judge said there was a private meeting between Setrakian and the US President after which she asked Rezaian to “send her all news and predictions about Iran, whatever he knows about the character of candidates of last year’s presidential elections, and a summary of the political, economic and social situation in Iran so that she could make them available to Obama”.

Rezaian denied the charge, but Salavati said he held firm and reliable evidence that supported the accusation.

Rezaian’s brother Ali said that for the past 10 months, the journalist has been kept in a cell block with only one other prisoner. He met attorney Leila Ehsan, for the first and only time, in April.