US Analysis: A Clinton Win is Not A Victory for Women — It’s A Defeat for Political Opportunity 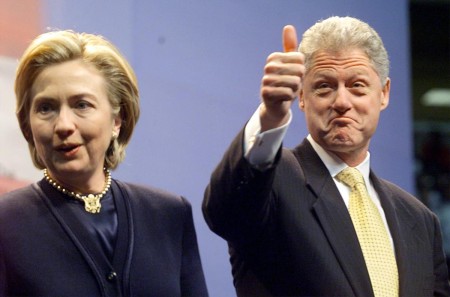 Helen Laville, Reader in American History at the University of Birmingham, writes a Birmingham Perspective:

Hillary Clinton’s announcement that she intends to seek the Democratic nomination for President of the United States surprised no one — we’ve been here before.

In 2008 Clinton ran a solid campaign only to be blindsided by the irresistible promise of Barack Obama. This time round she looks almost certain to secure the nomination. If she then wins the election, she will be the first female President of the United States of America.

But who beside Hillary wins?

Focusing attention on the Presidential race is as tempting as it is misleading. The media circus that is the US Presidential elections is a fascinating drama, and watching the candidates slug it out can become addictive. At the heart of this drama is the enormous symbolic importance of the Presidency to the American Dream.

Children all across the US are brought up to believe that the great thing about America is that anyone can be President. “I stand here knowing that my story is part of the larger American story,’ Obama told a captivated 2004 Democratic convention. “In no other country on Earth is my story even possible.”

Clinton’s 2008 campaign for the presidency similarly suggested her run for office had a symbolic value beyond personal ambition or partisan goals. In response to a heckler chanting, “Iron my shirt,” Clinton declared, “I am also running to break through the highest and hardest glass ceiling for our daughters.”

The mythology of the Presidential office feeds a particularly American glorification of the promise of individual accomplishment at the expense of collective progress. The election of Obama led many to declare that America was “post-racial”, a premature declaration of victory that cases of racially-motivated police violence from Ferguson, Missouri to South Carolina have decisively disproved.

The election of Hillary Clinton will no doubt be greeted with similar assertions that America is “post-gender”. But the use of one or two people as a litmus test for the values of an entire society is grossly misleading. The focus on high-profile female politicians such as Clinton, Nancy Pelosi and Sarah Palin obscures the massive under-representation of women in American politics. Women currently make up only 19.3% of the current House of Representatives, and only six of the 50 State Governors are women.

True, a Clinton victory might go some way to inspiring American daughters to imagine themselves in the Oval Office. It is equally possible that a bruising and brutally sexist election campaign will have the same effect in discouraging and depressing women’s political ambitions that Clinton and Palin’s 2008 campaigns had.

What will be most telling about a Clinton victory is not that Hillary will be the first woman to win the Presidency, but that she will be the second Clinton to do so. American politics is becoming an increasingly small field. Despite the rhetoric that anyone can grow up to be President, the stranglehold of American political dynasties is astonishing. The Kennedys, the Bushes, the Clintons, the Gores, the Romneys — the value of a family brand in American politics is in striking contrast to the ideals of individualism at the heart of the American Dream.

African-American activist Stokely Carmichael once observed: “It is not radical if Martin Luther King becomes President, if decisions are still made from the top down….If decisions get made from the bottom up, that’s radical.” His point was that getting a black man into the White House did not in itself change the racism endemic in American society.

Getting a white woman into the White House is an equally narrow victory. And if that woman is Hillary Clinton, it speaks not to the broadening, but to the narrowing of political opportunity in America.