Syria Interview: Why Southern Rebels Distanced Themselves from Jabhat al-Nusra 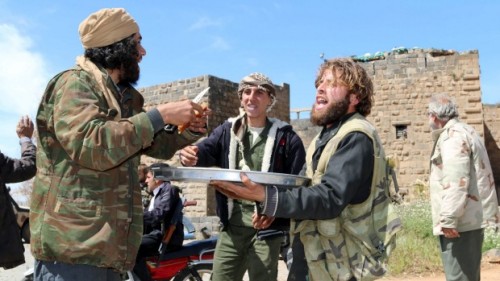 On Monday, rebel brigades in the Southern Front bloc issued announcements Monday distancing themselves from cooperation with Jabhat a-Nusra and calling on the Islamic faction to modify its hardline ideology.

Abu Zeid also pointedly criticized media for reducing the achievements of rebels to “Jabhat al-Nusra”, while blaming the rebel groups for any failures:

First of all, these announcements came from a place of responsibility towards the nation, and towards the Syrian cause. Nusra needs to act and split off from Al Qa’eda, because the continued connection between Nusra and al-Qaida makes things easier for the governments and bodies that want to keep Assad afloat.

Secondly, the harsh language in these announcements is not intended as a declaration of war. Rather, it is intended as a strong push for Nusra to determine its options and take steps [to benefit] the Syrian revolution, and break its ties with Al-Qa’eda.

Jabhat al-Nusra needs to understand that this is not a declaration of war. The FSA has exercised self-restraint in several situations, and has made the national interest and the gains of the Syrian revolution the top priority. The FSA has not taken upon itself the decision to face off [with Nusra]. Jabhat al-Nusra needs to understand that its connection to Al Qa’eda hurts the Syrian interest.

The fourth point that I’d like to focus on is the negative role governmental bodies and some media institutions are playing, which has created a state of frustration in the ranks of the FSA. These groups attribute all the victories occurring in Syria to Jabhat al-Nusra, inasmuch as the media focuses on Jabhat al-Nusra [while covering] all these victories.

There is also, lately, a focus on Daraa [Province in southern Syria]. Your honorable guest, who you were hosting minutes ago, attributed all the victories in Nassib [the border crossing with Jordan], Busra aL-Sham, and Kafr Shams to Islamist groups. But when cases of theft and looting occurred at the Nasib border crossing [with Jordan,] the Syrian opposition became the ones responsible for that. That is to say, when there’s a victory that means Nusra, and when there’s something negative, everyone runs in the direction of the Syrian opposition. This also creates a state of frustration. We want to direct a message to the media, to convey the real picture of what’s happening on the ground. The FSA has a large role in the victories in Daraa and Quneitra, and ignoring these accomplishments leads to frustration.

The announcements included a clear decision: as long as Nusra is walking in this direction, we cannot cooperate with them. The ball is in Nusra’s court, and they need to think carefully about the fact that the legitimacy that they gained in Syria is the legitimacy of combating the Assad regime, not for the sake of fighting other rebel brigades or telling them what to do.

We repeat that Nusra’s connection with Al-Qa’eda ends up helping all the enemies of the Syrian revolution to keep the Assad regime afloat on the international and regional level, and in the media. I think that they need to think carefully, and the issue is not one of threats nor war announcements.

We’re in a crisis today. We’re in a situation that does not allow exploration into tangential issues. We need to think boldly, make wise decisions and think about the interest of Syrians who have been bombed and killed for four years. Tangential conflicts are not in our interest. We need to put Syria’s interest first, and break our ties with all foreign agendas.