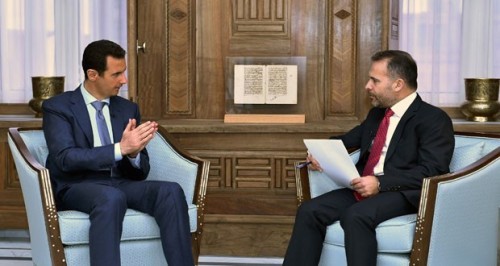 In an interview with the Swedish newspaper Expressen, President Assad has repeated his framing of the Syrian conflict as a fight against “terrorism” and tried to play down the rebel capture of the provincial capital Idlib: “When you look at the context of the war for the last four years, you have ups and downs. Sometimes you win, sometimes you lose.”

Assad blamed the defeat last month on outside powers:

They still support the same terrorists, because this behavior is not related to the crisis in Syria. They supported the terrorists in Afghanistan, they supported the Wahhabi ideology, the extremism that led to terrorism recently in Europe, for decades, and now they are supporting the same ideology and the same factions under different labels and names in Syria.

Assad also spoke about the recent meeting in Moscow between a regime delegation and selected members of the domestic opposition, calling it a “partial breakthrough” because “the next meeting will be promising in reaching a full agreement”.

However, the President gave no details about the advance. Syrian State media said last week that the two sides had agreed on “estimating the status quo”, but the head of the regime group, Syria’s UN Ambassador Bashar al-Jaafari, criticized the opposition members for divisions that prevented any substantial agreement.

Assad supported the efforts of UN envoy Staffan de Mistura for a six-week “freeze” in fighting in the divided city of Aleppo, but acknowledged that he was unlikely to succeed: “The Turks told the factions, the terrorists they support and supervise, to refuse to cooperate with de Mistura.”

Rebel and opposition groups have insisted that any “freeze” must apply beyond Aleppo to northwest Syria, large parts of which are opposition-controlled. The Assad regime has rejected that condition.

The President repeated his denial of regime use of chemical weapons; “We always said this is propaganda against Syria from the very first day, to demonize the president to demonize the state, in order to bring the hearts and minds of the Syrian people toward their agenda.” And he turned a question about regime torture of detainees back on the US:

Asking if he would have done anything differently in 2011, when the Syrian uprising began and escalated, Assad replied, “I don’t think anyone could say that we should have gone in a different way, whether regarding the dialogue or fighting terrorism.”