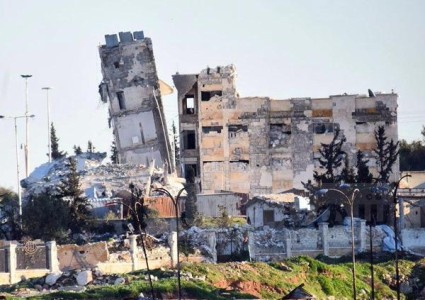 PHOTO: Remains of Air Force Intelligence building in Aleppo, before it was completely demolished by rebels on Monday

UPDATE 1730 GMT: There may be more good news for rebels and bad news for the regime, this time from the key battlefront south of Idlib city.

The rebel coalition Jaish al-Fatah, which took Idlib last month, destroyed a military convoy trying to reinforce the defense of the area near a key military camp, according to a local media activist.

“If it weren’t for the regime air support [that saved them], the rebels would have captured them all,” Ghatfan Shibli told Syria Direct.

The regime sent the convoy to win control of the town of Qamaenas, located on a hill that overlooks the highway between Idlib city and the Mastoumeh military camp, so it can bomb the rebel supply road.

The Assad regime has trumpeted the arrival of elite forces, including those under the prominent commander Colonel Sohail “The Tiger” Hassan, to push back the rebels and eventually regain Idlib.

Rebels claimed a series of victories on Monday, from the divided city of Aleppo to areas in and near Damascus.

The successes were not on the scale of last month’s capture of Idlib city in the northwest, but following the takeover of that provincial capital, they point to ongoing advance based on improved coordination of rebel forces.

In Damascus Province in the south, the opposition pushed back a weeks-long regime offensive near Zabadani, with the Islamic Front leading the counter-attack. They took control
of two regime checkpoints around a nearby mountain, claiming that 40 Syrian troops were killed or wounded. Heavy and medium weapons were captured, including two T-72 tanks, two BMP armored vehicles, mortars, 30 Konkurs missiles with a launching pad, and medium machine guns.

Syrian forces have tried for weeks to to seize territory around Zabadani to cut off the town, held by the opposition since January 2012.

Local sources reported that the rebels inflicted losses on the regime in the Tishreen and Wafidi camps in Damascus Province.

In the capital, the opposition reportedly took Zamalka Bridge, connecting Jobar — where the regime has tried to expel the rebels for more than two years — with the suburb of Zamalka, as well as several regime checkpoints on the periphery of the northeast part of the capital.

In Aleppo, rebels completed a symbolic victory with the demolition of the Syrian air force headquarters in al-Zahraa in the northwest. They also moved into the nearby al-Bashir Mosque.

The opposition destroyed much of the building in March when they detonated an underground bomb, followed by a ground assault. There have been sustained rebel attacks in al-Zahraa, with a number of significant regime buildings, and neighboring Layramoun since last year.

Celebrations in Aleppo over the news of the demolition:

The rebel advance could put pressure on the regime forces holding the western area of Aleppo, divided since the opposition entered in July 2012.

State news agency SANA insists, from a “military source”, “A unit from the army and armed forces thwarted an attempt by armed terrorist groups against a military position at al-Zahraa neighborhood to the west of Aleppo, killing and injuring a big number of terrorists and destroyed their vehicles and weapons.”

Since the end of 2014, rebels have reorganized the command of joint operations, with the blocs of the Levant Front, Islamic Front, and Southern Front; Free Syrian Army units; and the Islamist faction Jabhat al-Nusra working together on a series of frontlines across the country. Advances in the northwest and across the south, including the capture of regime bases, have been supported by improved supply of weapons, including an increase from Turkey and Saudi Arabia.

Rebels in the Southern Front have issued a statement warning the Islamist group Jabhat al-Nusra over its recent actions, including alleged abuses and confrontations with other factions.

The rebels, including elements of the Free Syrian Army, said they would not work with Jabhat al-Nusra:

The public and the military command in southern Syria reject any cooperation or convergence military or intellectually with Jabhat al-Nusra. The Southern Front leadership is the only military component representative of the Syrian Revolution in the south of Syria.

However, they stopped short of an announcement of conflict with the Islamists.

Nusra needs to act and split off from al-Qaida, because the continued connection between Nusra and Al Qa’eda makes things easier for the governments and bodies that want to keep Assad afloat….

The harsh language in these announcements is not intended as a declaration of war. Rather, it is intended as a strong push for Nusra to determine its options and take steps [to benefit] the Syrian revolution, and break its ties with Al Qa’eda.

Tensions with Jabhat al-Nusra have risen across southern Syria this year, with residents of Damascus suburbs demanding their withdrawal and rebel groups accusing al-Nusra members of seizing goods and threatening their members. At the same time, cooperation continued on the battlefield, for example, in the recent takeover of the Nassib border crossing with Jordan.

However, relations have approached breaking point over the accusations that local Jabhat al-Nusra units assisted the Islamic State — the enemy of the rebels — when the jihadists moved into the Yarmouk district of southern Damascus almost two weeks ago.