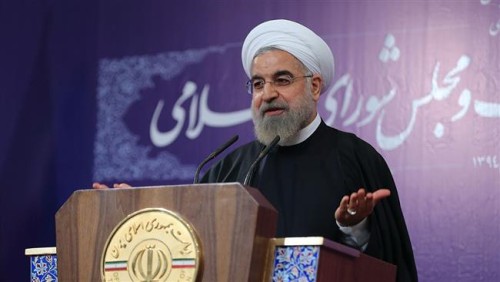 Taking a more cautious line than in his previous statements, President Rouhani said on Sunday that there is a “tough road ahead” for Iran and the 5+1 Powers to complete a comprehensive nuclear deal.

Rouhani told members of his Government and MPs that the nuclear framework, set out on April 2 after months of intense talks, is only the beginning of a “long and complicated” process for a final resolution by a June 30 deadline.

The President maintained the pose that Iran will only reach an accord from strength, rather than giving way to the pressure of sanctions:

The assumption that the US and the EU [European Union] are big powers and therefore can do anything is wrong. And their reputation and prestige would be jeopardized in case they violate their commitments. Our diplomats, legal experts, and politicians are formidable and the other side could not overpower us….

The other side clearly knows that this government and nation are not used to submissiveness.

Boosted by Saturday’s endorsement of the framework by the Revolutionary Guards, Rouhani was given further support by Speaker of Parliament Ali Larijani’s praise for the nuclear negotiators: “One of the nuclear talks’ achievements is resolving a fabricated negative atmosphere against Iran.”

Russian President Vladimir Putin has signed a decree to lift the ban on supplies of S-300 air defense missile systems to Iran, according to a statement from the Kremlin.

Facing Western pressure, Russia has refrained from delivery of S-300 surface-to-air missiles under a contract signed in 2010, prompting a $4-billion international arbitration suit from Iran.

The Kremlin statement today referred only to the S-300.

In a sign that the Rouhani Government wants to ease tension over a US “fact sheet” about the nuclear framework agreed on April 2, pro-Government MPs have said that an Iranian version should not be produced.

Iranian officials have publicly criticized the US fact sheet for saying that sanctions will not be lifted upon signature of a comprehensive deal, with the Supreme Leader declaring that the Americans are “dishonest” in negotiations. However, Foreign Minister Mohammad Javad Zarif has implicitly come close to the US version — that restrictions will be removed when the International Atomic Energy Agency verifies Iranian compliance — and Rouhani has stated ambiguously that the sanctions will be terminated “on the very first day of implementation”.

Critics of the American account have called for the “truth” through presentation of an Iranian fact sheet. However, two leading MPs said on Monday that there was no need for the fact sheet to be published while negotiations move towards a comprehensive agreement by June 30.

The statements may indicate that the Rouhani Government is not fundamentally at odds with the Americans, and wants any differences to be resolved in private rather than disputed in public.

In an escalation of the political crisis with Saudi Arabia, Iran has suspended flights to the Kingdom.

Tehran halted the flights, including those of pilgrims to Mecca, after Saudi officers reportedly sexually assaulted two Iranian teenagers during a security search at Jeddah airport. Protests were held in front of the Saudi Embassy in Tehran this weekend over the incident.

Iran has also stepped up its criticism of the Saudi-led aerial intervention in Yemen, with the Supreme Leader accusing the “inexperienced” Saudi monarchy of “savagery” and “genocide”.

Undercutting the standard regime line, a senior Iranian official has said that there will be no sudden recovery in oil exports after a nuclear deal.

Mohammad-Ali Khatibi, Iran’s former governor to OPEC, told the Iranian Students News Agency, “There will be no sudden return of the clients. There will not be an overnight increase in exports.”

Khatibi explained that some key customers have annual deals with other suppliers and cannot suddenly revoke them to turn to Iran.

The International Energy Agency said this week that, while Iranian oil production may grow “in three to five years”, it does not expect a significant rise in the short term as oil field have not been maintained “in the best way”.

Iran’s exports have been depressed by more than 40% since US-led sanctions took full effect in 2012.

Jason Rezaian, the Washington Post reporter imprisoned in Tehran for almost nine months, is accused of passing on sensitive economic and industrial information about Iran, according to Fars News.

Fars said Rezaian faces “security” charges in the Revolutionary Court but no trial date has been set. It claimed he had passed the information to unnamed Americans.

Rezaian was arrested July 22 along with his wife, reporter Yeganeh Salehi, and two other journalists in a raid by security forces. The other journalists were soon released and Salehi was freed on bail in October.

Rezaian’s family say he has been denied his choice of lawyer and has not been given information about the specific charges against him. He has been allowed only one brief, cursory visit with his court-appointed lawyer.