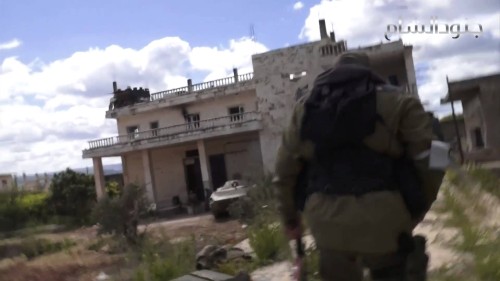 UPDATE 1610 GMT: Rebels are claiming the capture of al-Qahira in the al-Ghab Plain:

The move into the village, on the eastern side of the plain (see map), opens up the area to rebel advance.

Regime forces leaving a position in the al-Ghab Plain:

Civilians, some of them fleeing the fighting, greet rebels:

UPDATE 1610 GMT: Footage of Free Syrian Army troops in the center of Jisr al-Shughour as civilians try to leave the town before regime airstrikes begin:

UPDATE 1330 GMT: While the headline news is the capture of Jisr al-Shughour, rebels have also made further gains to the south in the al-Ghab Plain.

The Free Syrian Army announced the capture of seven checkpoints on Sunday, with the seizure of two tanks, three armored BMPs, a launching pad for anti-tank guided missiles, and other military vehicles. Clashes are also taking place for the villages of al-Qahira (see map), with another tank destroyed, and al-Qarqour.

UPDATE 1300 GMT: More images from Saturday’s rebel capture of the town of Jisr al-Shughour, near the Turkish border….

A journalist from Homs greets his Homsi friend among the rebels:

A journalist attached to the Free Syrian Army breaks down as he discovers his destroyed home:

Rebels at the home of Colonel Hussein al-Harmoush, who defected to the rebellion in 2011 but was later seized, detained, and executed by the Assad regime:

UPDATE 1000 GMT: Journalists, activists, and rebel sources are all hailing the liberation of Jisr al-Shughour this morning, on the fourth day of the rebel offensive across southern Idlib and northern Hama Provinces.

Video from the security zone:

Orient News is broadcasting from inside the town (see their Live Stream): 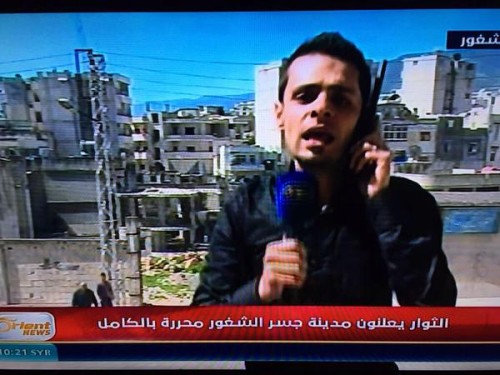 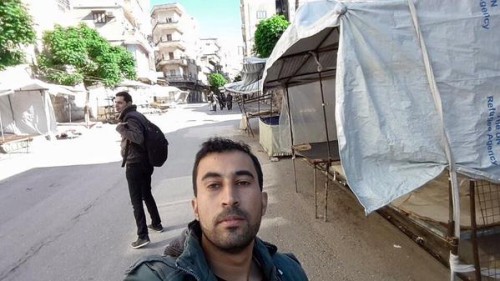 Rebels trample on the image of Bashar al-Assad: 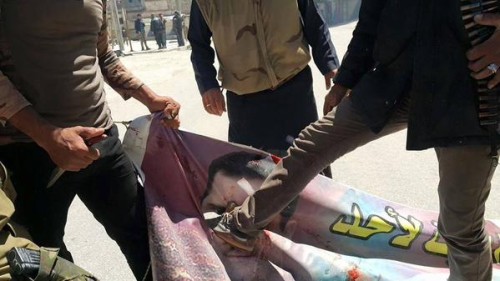 Resistance from Assad forces continues at some checkpoints near the town, reportedly to the north, east, and south.

The army has redeployed its combatant units in the surroundings of Jist al-Shughour city to avoid any victims in the innocent civilians, fortified its defensive posts in the vicinity, and directed severe strikes against the terrorists’ gatherings and their supplying lines in the city….

The Syrian air force has not yet struck Jisr al-Shughour , reportedly because of high winds hindering raids, but there is already concern that attacks will soon begin — if not for Syrian forces to reclaim the area, then to destroy the prospect of a functioning opposition-held town.

Like Idlib city after liberation, Jisr Al Shughour infrastructure is in good condition. Now wait for the barrel bombs pic.twitter.com/FMK2Cpa5Iy

Civilians fleeing the town in anticipation of retaliatory airstrikes:

UPDATE 0800 GMT: Reports are circulating that rebels have moved far inside the key town of Jisr al-Shughour, with fighting near the National Hospital. One prominent pro-Assad activist has switched from claims of the Syrian military’s resistance — with massive rebel casualties — to concern:

Presuming Jisr Al-Shughour has fallen. I don't know for sure; will likely find out soon enough.

Claimed photo of rebels in the town, with the minaret of the main mosque in the background: 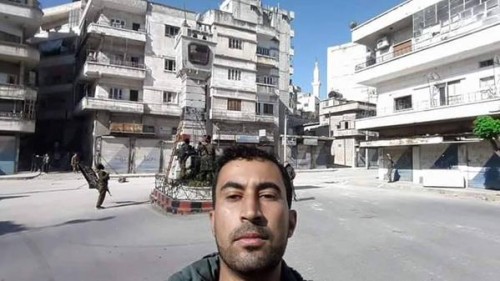 Jabhat al-Nusra posts footage of fighting inside the town:

Rebels made further gains on the third day of their offensive in southern Idlib and northern Hama Provinces in northwest Syria, threatening to cut a vital highway for regime forces and putting pressure on the key town of Jisr al-Shughour.

Opposition fighters took two hills along the M4 highway from southern Idlib to Latakia on the Mediterranean coast in western Syria on Thursday morning. While claims circulated later in the day that Syrian forces had taken one of the hills — reportedly following 44 airstrikes and multiple strikes with Grad rockets — the other remained in rebel hands, and the highway was still cut off to regime reinforcements.

The link is vital not only for the outcome of the Idlib-Hama offensive, but for the fate of Syrian military positions south of Idlib city, attacked since the provincial capital was taken by the rebels on March 28. Fighting continued on Thursday at one of those positions, the Qarmeed camp (the Brick Factory), with Jabhat al-Nusra continuing to press ground assaults as well as mortar fire and shelling.

Near the Turkish border, rebels continued to surround the town of Jisr al-Shughour, which lies on the highway between Aleppo and Latakia. The rebels reportedly took more checkpoints overnight, having breached the town’s northern entrance on Wednesday.

Rebel fighters from Jund al-Sham near the town:

Clashes at the sugar factory:

A rebel coalition including the Islamic Front, with factions such as Ahrar al-Sham, and other groups such as Ansar al-Sham, Jund al-Sham, and Jabhat al-Nusra, is pursuing the offensive after at least four months of planning. Sources say more than 10,000 fighters are involved.

A Saturday protest in Kafranbel in northwest Syria chides UN envoy Staffan de Mistura, who has pursued a plan for a “freeze” in Aleppo for months without success:

De Mistura, who became UN envoy in July, said earlier this week that he is convening a conference of regime representatives and members of the Syrian opposition in Geneva on May 4.

Claims are circulating that Israeli warplanes are behind explosions at regime missile and weapons depots in Damascus Province.

F-16 jets struck the sites near Al-Qutayfah, Yabroud, and Qarah. Al Jazeera reports that the 155th and 65th Brigades of the Syrian Army, which deal with strategic weapons and long-range missiles, were also hit on the Syrian-Lebanese border.

The 155th Brigades is said to be a main base for Scud B missiles and one of the most-fortified complexes in Syria.

A Free Syrian Army unit has claimed the attacks near Damascus; however, the rebels do not have F-16s.

A pro-Assad activist has confirmed Islamic State claims that they downed a Syrian warplane near Khalkhalah airbase in Suweida Province in southern Syria, killing the pilot.

Leith Fadel identified the pilot as Hassan al-Mahmoud of Babeenas in Aleppo Province.

The situation near Suweida Province has become increasingly tense in recent months, with the Islamic State expanding its operations and rebels advancing across southern Syria to the province’s border.

See Syria Analysis: The Druze Face the Islamic State’s Expansion in the South — What Next?

The UN’s top officials for refugees have told the Security Council that the situation in Syria and Iraq is “unsustainable”.

Speaking of 14 million people who have fled their countries or been displaced inside them, the official rebuked the 15 members of the Council for their failure to exert authority to intervene.

“One thing is clear: the situation in the region has become utterly unsustainable,” António Guterres, the UN High commissioner for Refugees, said. “[The crisis is] a cancer that risks spreading and metastasizing.”

International humanitarian law prohibits torture, starvation, the targeting of schools and hospitals — but these crimes are happening every day in Syria. The Security Council has powers to address these threats to international peace and security — but those powers lie unused….

We cannot look at Syria, and the evil that has arisen from the ashes of indecision, and think this is not the lowest point in the world’s inability to protect and defend the innocent.

Guterres warned of “host fatigue” with the stresses upon Syria’s neighbors Turkey, Lebanon, Jordan, and Iraq, who have taken in more than 4 million refugees: “There are increasing tensions between communities, as local families struggle harder to cope the longer the conflict drags on.”

Valerie Amos, the departing UN emergency relief coordinator, asked the Council to take action including a specific ban on attacks on schools and hospitals.