Syria Daily, April 28: 200+ Killed in 2 Days as Regime Retaliates for Losses on Ground 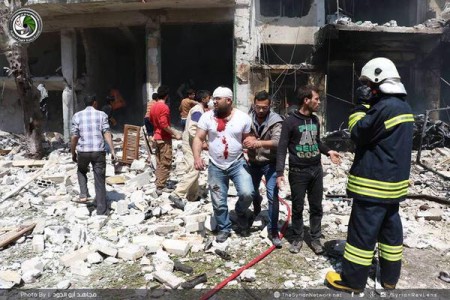 PHOTO: Aftermath of bombing of Darkoush in Idlib Province, killing 62 people, on Sunday

Video: Is This When Famous Colonel “The Tiger” Hassan Appealed to Damascus for Reinforcements?
Snapshot: In Damascus, 1 Month’s Salary = 15 Kilos of Bananas

The Local Coordination Committees report that another 85 people were killed, mainly by airstrikes, as Syria’s military retaliated for the recent loss of territory in northwest Syria.

On Sunday, the LCC reported 125 deaths, including 34 victims — a total later raised to 62 — in Darkoush, north of Jisr al-Shughour, the key town captured by rebels a day earlier.

Of Monday’s deaths, 30 were in Idlib Province, 25 were in and near Damascus, and 15 were in Aleppo Province.

Among the casualties were a crew of rescue workers, with one killed and five injured by a strike on their vehicle:

Aftermath of a strike on Saraqeb that flattened a home:

On the ground, rebels consolidated their hold on the Qarmeed (Brick Factory) camp, south of Idlib, after it was taken from the Syrian military on Sunday.

The loss leaves the regime with only significant position, the Mastoumeh camp, in the area after the fall of Idlib city and a month of rebel assaults. Mastoumeh is likely to facely further attacks with weapons taken from Qarmeed, and it is at risk of being cut off if rebels complete the takeover of the M4 highway between southern Idlib and Latakia in western Syria.

The Syrian military tried to open an alternative route by taking villages in the al-Ghab Plain, to the south of the M4 highway, on Sunday. Pro-Assad outlets claimed success with the capture of Qastoun, Misheek, and Zayarah, but pro-rebel accounts said the area is still being contested.

The rebel offensive across southern Idlib and northern Hama Provinces has taken much of the eastern part of the al-Ghab Plain since last Wednesday.

A tour of captured regime checkpoints in al-Ghab:

The pro-opposition Orient News covers the last battle in Jisr al-Shughour, when Syrian troops held out in the National Hospital (Warning — Graphic Images):

An Islamic State affiliate, Saraya al Jihad, is fighting with rebels in Quneitra Province in southwest Syria, near the demilitarized zone with Israel.

Local sources say Saraya al Jihad ambushed rebels, who counter-attacked and say they are now “cleansing the area“. The sources say local units of Jabhat al-Nusra sided with the rebels, who include Ahrar al-Sham and Jaish al-Islam.

Defense Minister in Iran for Talks

Syrian State news agency SANA gives no details, merely citing “steps of mutual strategic cooperation between the two countries’ armies to face regional challenges and threats and the terror dangers on the region and the world”.

Footage of fighters from Liwa al-Sultan Murad, a mainly-Turkmen brigade from Aleppo, inside the sugar factory occupied during the capture of the key town of Jisr al-Shughour in Idlib Province last weekend:

Pro-Assad accounts are claiming, without support, that elite Syrian forces retook the factory on Sunday.