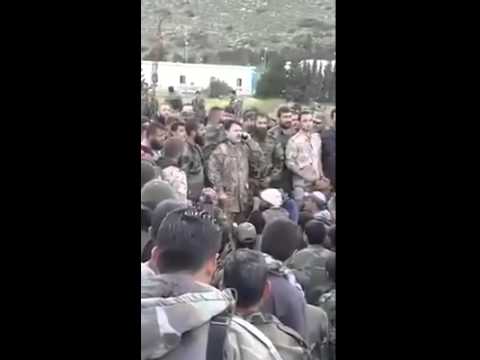 UPDATE, APRIL 29 A translation has now been posted of Colonel Hassan’s conversation, based on a close-up video of his phone call to Damascus:

Hello…my respect sir…Mr Lieutenant General…the…forces from al-Ziyara and from the, from all the
checkpoints [are] in front of me now. Around 800 fighters…standing now on the road…and all of them say…all of them say one word…

[Apparently speaking to another officer] Ok, Ok sir…My respects Mr. Lieutenant general…Sir, the forces have withdrawn from al-Ziyara and al-Tanmiyah checkpoints…and the other checkpoints. Here are they in front of me…in front of me 800 fighter…All of them with soul and blood, we sacrifice for you, Bashar.

[Soldiers: “With soul and blood we sacrifice for you, Bashar.”]

[Soldiers: “With soul and blood we sacrifice for you, Bashar.”]

The Minister of Defense. We greet you….We tell you this because we want to live another reality. It can’t be that …

[Soldiers: “It’s written on our weapons….We sacrafice our souls for Assad.”]

For days, the story has circulated that one of Syria’s top military commanders, Colonel Soheil “The Tiger” Hassan appealed for help from Damascus as rebels advanced through Idlib and Hama Provinces in northwest Syria.

With the opposition moving rapidly in the Idlib-Hama offensive — taking the key town of Jisr al-Shughour — and threatening to cut off some of Syria’s best forces south of Idlib city, Hassan had supposedly sent a dire warning of defeat to President Assad’s advisors.

We were cautious about the reports — and the claimed photographs — but now video has been posted of the call. Surrounded by his men and supporting himself with a case, Hassan is speaking loudly on the phone as the fighters begin chanting.

It is difficult to make out Hassan’s words as he finished the call and then speaks to those around him.