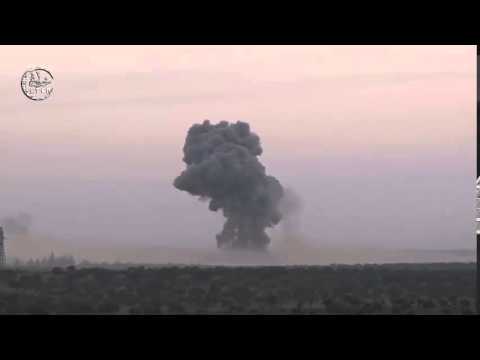 The Syrian air force is now bombing the camp, and the Army is shelling from nearby Mastoumeh camp, its last major position south of Idlib.

Sources say rebels and Jabhat al-Nusra may now advance for a ground assault on Mastoumeh.

Fighters touring part of the camp and taking regime weapons and supplies:

An airstrike on the camp after it fell:

Jabhat al-Nusra’s map of the area, showing its control of the Brick Factory:

A local source adds, “The range for shelling can be even close to 40 km, for example, with 155 mm shells. The 25 km range is meant as ‘strike with some accuracy’ — not what they intend when terrorizing civilians.”

A month after the start of rebel attacks, the Syrian military is facing the loss of one of its two remaining camps south of Idlib city in northwest Syria.

The rebel coalition Jaish al-Fatah began bombardment of the Mastoumeh and Qarmeed (Brick Factory) camps as the provincial capital Idlib was captured by the opposition on March 28.

The Syrian army and militia have held out in the fortified complexes, and reinforcements — including elite troops — arrived to prevent defeat.

However, Jaish al-Fatah stepped up ground assaults, including vehicle-borne bombs by Jabhat al-Nusra fighters, in the past week. Taking checkpoints to the east of the camp, they breached the entrance this weekend and renewed their attack on Sunday night following two car bombs during the day.

Fighting is ongoing this morning. Latest reports are that the camp has not fallen, but defenders have retreated further into it, away from the breached entrance.

Advance on the Poultry Farm checkpoint with a tank:

Night-vision footage of the capture of the Qarmeed checkpoint:

A fighter with journalist Hadi al-Abdallah at the gate this morning, with the sound of shelling in the background:

The situation of the Syrian military has been worsened by the likely cut-off of the M4 highway to the west of the camps, as rebels pursue a major offensive across southern Idlib and northern Hama Provinces.

The loss of Mastoumeh and Qarmeed would almost eliminate the Syrian military’s presence in Idlib Province, with a possible rebel advance on Ariha further to the south.

An activist notes the significance of the Qarmeed camp in the Syrian military’s operations since 2011, with numerous civilian casualties.

The Syrian military, facing the cut-off of its vital highway between southern Idlib Province and Latakia in western Syria on the Mediterranean coast, is trying to open an alternate route across the al-Ghab Plain.

Pro-Assad outlets are claiming the army took the villages of Qastoun, Misheek, and Zayarah. However, pro-rebel accounts say the area is still being contested.

The rebel offensive across southern Idlib and northern Hama Provinces took much of the eastern part of the al-Ghab Plain over the weekend. The rebels are also threatening to cut the M4 highway between Ariha in southern Idlib — likely to be attacked by the rebel forces soon — and Latakia.

Louay Hussein, a leading member of Syria’s domestic opposition, is going into exile out of fear over his personal safety.

Hussein, the head of the Building the Syrian State, announced that he was in Spain with his family after a “long and difficult journey”.

“I was obliged to leave the country after I sensed significant danger, and after I became completely convinced that the regime no longer had the capacity for reconciliation or negotiating a serious solution,” he wrote on his Facebook page. “The regime is moving ahead with its failed policies until the entire country and state institutions collapse.”

Hussein said he would travel to Turkey this week to meet with members of the external opposition Syrian National Coalition, its provisional government, and other opposition figures to discuss a plan to “save the country from the dangers posed by the forces that seek to break up [Syria] –– the regime, ISIS [Islamic State], and the Nusra Front.”

Hussein and Building the Syrian State’s Vice President, Mona Ghanem, apparently slipped out of Syria earlier this month while on a visit to the Kurdish-controlled northeast.

Hussein was detained at the Lebanese border in November while trying to visit family members in Spain. He was held for several weeks before he was released on bail, but was forbidden to leave the country as he still faces charges of making anti-regime statements.

He was prevented by the regime from attending talks hosted by Moscow in January between a regime delegation and selected members of the opposition.

A successful attack on a T-72 tank:

The “1st Regiment” of Aleppo’s rebels, made up mainly of fighters from the former Liwa al-Tawhid faction, on the move in the Old City of Aleppo.

The regiment claims to have killed more than 70 Syrian troops in battles on Monday.

Rebel factions have been stepping up attacks on regime positions this month. On Sunday, at least three tunnel bombs caused significant damage.

An “Israeli source”, using the daily Haaretz, has denied that Israel’s air force struck missile batteries belonging to Hezbollah and the Syrian army inside Syria on the Lebanese border.

Reports this weekend said that F-16 jets had fired missiles at the batteries, and also at military complexes and missile depots in Damascus Province.

The IDF would not confirm or deny the allegation. However, “a source in the Israeli defense establishment” said any strike was part of the fighting between the Islamist faction Jabhat al-Nusra, Hezbollah, and the Syrian military in the Qalamoun region. He maintained that Israel has no interest in getting involved in the conflict between the sides.

The source did not speak about the reports that Israeli jets had hit the missile depots and base, including those of the 65th and 155th Brigades, near Damascus.

The 155th Brigade oversees some of the Scud B missiles held by the Assad regime.

Observers have speculated that Israel, with both past confirmed strikes and last weekend’s attacks, is trying to destroy any advanced missiles that might be provided by Damascus to Hezbollah.

All leading rebel factions in northwest Syria, except Jabhat al-Nusra, have created a new operations room, Fateh Haleb, with the goal of liberation of all regime-held areas in Aleppo Province.

The creation of Fateh Haleb follows the successor of the Jaish al-Fateh operations room, which has advanced rapidly in Idlib Province — including the capture of the provincial capital Idlib and the Syrian military’s most important camps — and is now pursuing a major offensive across southern Idlib and northern Hama Provinces.

The announcement comes only weeks after the dissolution of the Levant Front, which had overseen rebel activities in Aleppo Province.d