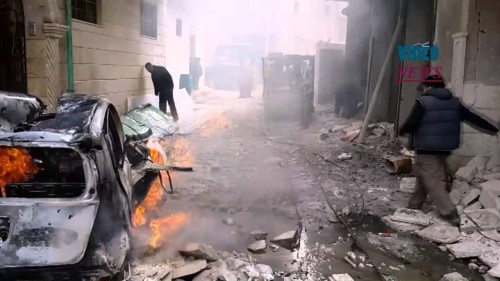 The Local Coordinating Committees reported 102 people killed, with 82 of the casualties in and near Aleppo in northwest Syria.

The toll included at least 10 people killed by a vacuum bomb on an elementary school in Aleppo city. Another 30 people were wounded, according to Syrian civil defense. All schools in opposition-held areas have now been closed indefinitely.

Video of the bombed elementary school, including images of victims beheaded by the blast (Warning: Very Graphic Footage):

In the past week, rebels have stepped up attacks on regime checkpoints in several areas of divided Aleppo, Syria’s largest city, including the areas of Bab Hadeed, Bawabet al-Fateh in the Old City, Maysaloun, and Suleimaniyah.

State media proclaims that “the armed forces carried out…accurate operations against gatherings of terrorists in a number of neighborhoods in Aleppo city”. The Foreign Ministry protested to the UN that rebel mortar and rocket attacks last week left “at least 19 civilians dead and scores of others wounded”.

Aftermath of one of the airstrikes:

Catholic priest Michel Oubaji, who met rebels for Easter days before he was killed in an airstrike, is buried in Aleppo:

Countering the Islamic State’s entry into Yarmouk in southern Damascus, rebel factions have struck the jihadists in nearby areas, inflicting casualties.

Local sources say at least 10 Islamic State fighters were killed, most in the suburb of al-Hajar al-Aswad, the main site of the jihadists.

A local activist, Abu Marem al-Jolani, says the rebels — led by Jaish al-Islam — infiltrated the neighborhood of Zain with several IS checkpoints. The area is between al-Hajar al-Aswad and the suburb of Yelda, where hundreds of Palestinian refugees from Yarmouk have fled.

Jaish al-Islam spokesman Islam Alloush claimed on Twitter, “A raid on al-Hajar al-Aswad, complete control of Zain neighborhood and the killing of many [Islamic State fighters].”

“Members of Jaish al-Islam are stationed in buildings in the Zain district, and there are still snipers from both Islamic State and Jaish al-Islam in the area,” said Matar Ismael, a Yarmouk-based activist.

Rebels Inflict Heavy Losses on Regime Forces Near Zabadani in South, Win Victories In and Near Damascus

Syrian forces have been tried to seize territory around Zabadani to cut off the town, held by the opposition since January 2012. However, rebels have unified under the Islamic Front bloc to improve fighting capability.

Local sources report the rebels have also inflict losses on the regime in the Tishreen and Wafidi camps in Damascus Province. The website of the Syrian National Coalition says the opposition has taken Zamalka Bridge, connecting Jobar with central Damascus, as well as several regime checkpoints on the periphery of the northeast part of the capital.

Regime Swaps Detainees in South After Pressure from Druze Sheikhs

The regime has exchanged three female detainees from Daraa Province in southern Syria for three rebel-held Druze prisoners from neighboring Suwayda Province after it was pressured by local Druze sheikhs, according to pro-opposition Orient News.

Suwayda Druze leader Sheikh Balaous said that he had warned the Suwayda Governor of hostile action if the Daraa detainees were not released.

“This is a warning I want to be spread as much as possible,” Balaous said. “If the girls are not released from the security branch that they are held in, no one blame us. We sent people to the governor and to the security council, and if they do not release them, we did our part and there is no blame on us.”

Rebels from Daraa kidnapped three Druze civilians from a village in Suwayda Province last Tuesday to get leverage for the release of the Daraa detainees — held by the regime in Suwayda’s Airport Intelligence Branch — reported pro-opposition news agency Syria Mubasher.

The kidnapping came after previous rebel attempts to secure the women’s release failed.

Meanwhile, an estimated 250 people protested outside a State security branch in Suwayda city on Saturday, demanding the release of a man arrested for avoiding military service, according to local media.

UN envoy Staffan de Mistura has said the world should listen more closely to Russia to resolve the Syrian conflict.

in an interview published on Monday, de Mistura said:

Russia has influence on Damascus, and it’s very important that they get involved.

The two countries’ relationship goes back to the time when Bashar al-Assad’s father was in power. Therefore the Russians do have a knowledge of the system and the way they think.

The envoy said that he had hoped the “outside threat” of the Islamic State “might produce some common understanding between those who were unable to turn around the conflict,…[but] I was wrong.”

Since his appointment last July, de Mistura has pushed a plan for a “freeze” in fighting in the divided city of Aleppo as the first step towards a political settlement; however, the proposal has failed to make headway, with rebels saying that a ceasefire might cover all of northwest Syria and the Assad regime resisting the idea.

“The Tiger” Arrives in Idlib Province — Can He Rescue The Regime’s Military Position?

Pro-Assad media are hailing the arrival of the prominent commander Colonel Soheil “The Tiger” Hassan in Idlib Province as the resurgence of the Syrian military after the loss of Idlib city and threats to nearby regime positions.

The loss of Mastoumeh would further threaten regime lines to Aleppo and Latakia Provinces in northwest Syria.

State news agency SANA says Ayoub lauded the “high morale” of troops and praised them “for the sacrifices they make and the heroic acts they perform in combating terrorists”.