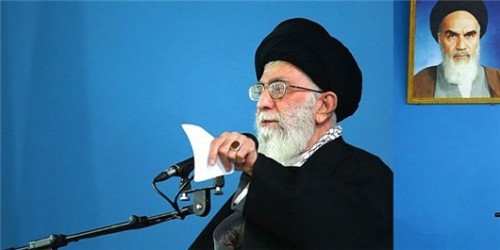 Iran took its political offensive on the Yemen crisis to the highest level on Thursday, with the Supreme Leader issuing a strident, insult-filled challenge to Saudi Arabia over its military intervention.

Ayatollah Khamenei chided the “inexperienced youngsters” of Riyadh: “The Saudis will definitely be struck back in this issue and their nose will be rubbed against the ground. This action (of the Saudis) is not acceptable in the region and I warn that they will certainly lose interests.”

Two weeks, a Saudi-led coalition of Arab and Islamic countries began airstrikes across Yemen to check the advance of the Houthi movement, which took power in the Yemeni capital Sanaa in February. On Wednesday, more than 100 people were killed in the attacks. However, the Houthis continued to put pressure on the southern port city of Aden, where President Abdrabuh Mansour Hadi attempted to set up an alternative Government after his flight from Sanaa.

The Iranians have given economic, political, and military support to the Houthis, a Zaidi Shia group.

The Supreme Leader said on Thursday that the Saudis used to show more self-restraint and sobriety in their foreign policy, but alleged that affairs are now controlled by a number of inexperienced young people who “want to show savagery”. The jibe was pointed at the 30-year-old Saudi Defense Minister, Prince Mohamed bin Salman, who took the post when his father Salman became King in January.

Khamenei’s comments — which came as he expressed caution over nuclear talks with the 5+1 Powers (see separate entry) — were also a defiant response to the US.

Secretary of State John Kerry said on Wednesday night that Washington was “not going to stand by while the region is destabilized”, accusing Tehran of military backing for the Houthi offensive:

There are obviously supplies that have been coming from Iran. There are a number of flights every single week that have been flying in. We trace those flights, and we know this. We are well aware of the support that Iran has been giving to Yemen.

The Supreme Leader did not waver over the remarks. Instead, he also scoffed at the Saudis over the nuclear issue:

An underdeveloped country said that “if Iran has enrichment, we want it too”. Well, do it if you can. Nuclear technology is our domestic capability.

Iran stepped up its political offensive earlier this week. The Supreme Leader used a photo opportunity with Turkish President Erdoğan to express “opposition to foreign intervention” in Yemen, and the Iranian military said it was sending a naval flotilla for the Gulf of Aden and Bab al-Mandab Strait off the Yemeni coast.

Saudi Arabia’s Brigadier General Ahmed Asseri warned the Iranian warships to steer clear of Yemeni waters: “If the ships seek to aid the Houthis, the coalition has the right to choose the proper answer.”

The Saudis also sent out another signal with the denial of permission for an Iranian plane filled with pilgrims to land in Mecca.

On the diplomatic front, Foreign Minister Mohammad Javad Zarif pressed Pakistan’s leaders to distance themselves from the Saudi-led operations.

Speaking during a two-day visit to Islamabad, Zarif said on Thursday, “The past experiences show that the consequences of the military intervention in Yemen will become part of the problems.”

On Friday, Pakistan’s Parliament unanimously passed a resolution expressing the “desire that Pakistan should maintain neutrality in the Yemen conflict” while reaffirming Pakistan’s “unequivocal support of the Kingdom of Saudi Arabia”.