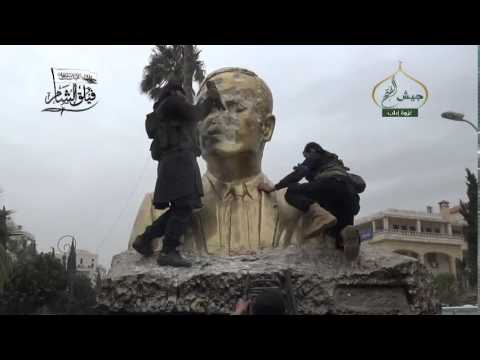 A coalition of rebel groups claimed victory on Saturday in Idlib in northwest Syria, the second provincial capital lost by the Assad regime in the four-year conflict.

The offensive to capture the city took only four days, as regime resistance crumbled quickly on Friday — when more than half of Idlib was occupied by the rebels — and yesterday.

Videos and photographs showed rebel celebrations in front of regime buildings, inside the Governor’s Palace, and in the main square, where opposition fighters fell to the ground and gave thanks. Statues of the late President Hafez al-Assad were destroyed with sledgehammers, and fighters burned, ripped, and stood upon large posters of the current President Assad.

With the Syrian air force likely to retaliate with bombing, civil defense units moved civilians out of the city. Evacuations of some areas began on Friday as rebels advanced, and Majid Idlibi told the BBC on Sunday morning that civil defense has now brought out 1,500 families:

Video of other detainees being freed:

The rebel offensive include Islamist and Islamic groups — including Ahrar al-Sham, one of the largest factions in the Islamic Front — in the Jaish al-Fatah operations room; the Islamist Jabhat al-Nusra; and units of the Free Syrian Army. Most of the fighters were local men, many of whom had been displaced by the conflict: video showed some being reunited with families on Saturday.

The Local Coordinating Committees published the names of 71 fighters killed in the offensive. Regime losses are not known, but are likely to be far higher. Of the dead, 58 were from Idlib, eight from Homs, and two from Hama. Only three were foreign fighters.

State news agency SANA is still refusing to acknowledge defeat, headlining, “The Army Continues Clampdown, Confronts Terrorists Infiltrating Idleb City”. Regime supporters may have behind an effort to discredit the victory through a fake Twitter account attributed to General Salim Idriss, the former head of the opposition Supreme Military Council — tweets portrayed his recognition that Jabhat al-Nusra was the “only” armed group which could defend the Syrian people.

Rebels did not stop with the victory in Idlib. Even as some fighters gathered in the central square, others were attacking the regime on the main road south of the city to Aleppo and Latakia. By Saturday afternoon, Mastoumeh hill had been taken, and the opposition was attacking the nearby village of the same name.

On the frontline south of Idlib:

Idlib is the first provincial capital lost by the Assad regime since Raqqa — now held by the Islamic State — in summer 2013.

Sheikh Muhammad al-Mohaisany, the head of the Sharia Council of the Jaish al-Fatah operations room, issued a statement on Saturday night about legal arrangements in the “liberated” Idlib. He said a new “United Court” would be established, rather than a body dominated by either Jabhat al-Nusra or by the Islamic Front and Free Syrian Army.

Al-Mohaisany said the Sharia Committee had already been chosen, with factions agreeing on the system for headquarters and administration. He concluded, “The city swill be a new start for unity between the factions.”

The leader of Ahrar al-Sham, Hashem al-Sheikh, issued a statement to all rebels: “Be humble, unite in governance without factionalism, and show a good image. Put the benefit of Islam and the people before groups.”

To the people of Idlib, al-Sheikh said, “These are your sons who came to remove oppression, not to put themselves as rulers, so aid them in administering the city.” And he warned the Assad regime that, if Idlib was bombed, rebel forces would strike the pro-regime enclaves of al-Fu’ah and Kafraya to the north of the city.

Fighters of Jabhat al-Nusra and Ahrar al-Sham have reportedly rescued an aid convoy of the Syrian Red Crescent and the UN, after they were captured by gunmen.

The incident took place near Rastan, north of Homs, which has been besieged by the Syrian military for months. The town was taken by the opposition in 2012.

An unconfirmed claim says the 30-truck convoy was accosted by an Islamic State group including Abdul Baset al-Sarout, a prominent footballer who led rebels in Homs until he defected to the jihadists last year.