Iran Daily, March 29: Nuclear Talks – US and Tehran Each Tell Other “Make Concessions for A Deal” 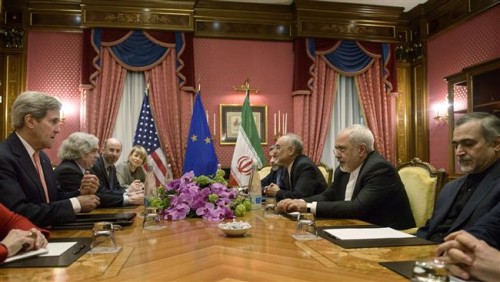 UPDATE 1915 GMT: Iran’s lead negotiator, Deputy Foreign Minister Abbas Araqchi, has said that a meeting on Monday morning with the Foreign Ministers of the 5+1 Powers will be “crucial”.

UPDATE 1345 GMT: Barbara Plett, the BBC’s correspondent at the US State Department, indicates that an agreement has been reached on the General Framework of a nuclear deal:

However, Laura Rozen of Al-Monitor offers different information from Lausanne:

fwiw, provisional agreement not yet reached, western off'l at the talks says …

But Iran’s Arabic-language Al-Alam TV is also reporting a breakthrough:

With nuclear talks approaching an informal March 31 deadline, Iran and the US have each called on the other to make concessions for an agreement.

Iran and the 5+1 Powers (US, Britain, Germany, France, China, and Russia) held a third day of negotiations in Lausanne, Switzerland on Saturday. Iranian Foreign Minister Mohammad Javad Zarif and US Secretary of State John Kerry were joined during the day by French Foreign Minister Laurent Fabius and German Foreign Minister Frank-Walter Steinmeier.

The two sides appear to have agreed a procedure for a two- to three-page statement of General Principles by Tuesday, with detailed arrangements to be confirmed by July 1. However, they are still divided over issues such as Iran’s research-and-development centrifuges for uranium enrichment and the timing of the removal of US-led sanctions.

President Rouhani put out Iran’s message in a phone call to German Chancellor Angela Merkel, “We have come close to sensitive days. Iran has shown the crucial flexibility during the talks, and now it is the opposite side’s turn to take the final steps.”

Rouhani repeated Tehran’s condition that sanctions must be lifted soon after completion of a deal, declaring, “We have always sought a win-win accord and this will serve the interests of all sides.”

In Lausanne, Zarif echoed the President, “I believe that France and Germany are serious about an agreement. We are ready to draft.”

On his Facebook page, the Foreign Minister explained, “We have made progress in reaching acceptable solutions, but we still have to work on some important issues; the key to striking an agreement lies in this strategic choice that the other side should make: pressure and sanctions or interaction and agreement.”

However, US “senior officials” continued to insist that Iran must make concessions, notably over the research-and-development centrifuges. “The serious but difficult work continues,” one said on Saturday.

Iran has reportedly already conceded a 35% cut in its operational level of 40-year-old IR-1 centrifuges, to about 6,500. Tehran has also accepted that IR-2 centrifuges, installed in early 2013 but never put into operation, will remain off-line. However, the Iranians say that they must be able to continue the R&D of IR-2 and even more advanced IR-4 models — in expectation that they can operate by the end of the comprehensive agreement — at the Fordoo enrichment plant.

As you know, we have never been so close to a deal.

We still have some critical points that need to be solved, and we are working over the hours, over the weekend to bridge the gaps.

I will not go into the details of the negotiations. It’s not the right time to do it. I hope we manage to do it in the coming days.

Former President Hashemi Rafsanjani, who also heads Iran’s Expediency Council, said on Sunday that he is cancelling a forthcoming visit to Saudi Arabia because of Saudi airstrikes in Yemen.

Rafsanjani sent his message through Ghodratollah Alikhani, his Parliamentary Advisor at the Expediency Council.

Saudi Arabia began its aerial assault on Thursday to check ground advances by forces of the Houthis, the Shia Muslim movement in control of Yemen’s capital Sanaa.

Rafsanjani has been important in President Rouhani’s strategy of “engagement” with Saudi Arabia, pursuing back-channel contacts to prepare for public discussions.

Rouhani: “Iran is Out of Recession”

Amid nuclear talks which could be vital for Iran’s economic future — and despite ongoing problems — President Rouhani has declared that the country is out of recession.

Speaking with the Board of Directors of free trade zones, Rouhani said, “General conditions of the country are now improving day by day.”

The President said Iran was putting a priority on the advantages of new technologies, absorbtion of investments, and use of experts:

There is no doubt that Iran will attain economic prosperity this year and all should spare no efforts to materialize this goal. The era of recession is now over and we require some more time to reach satisfactory conditions through more efforts.