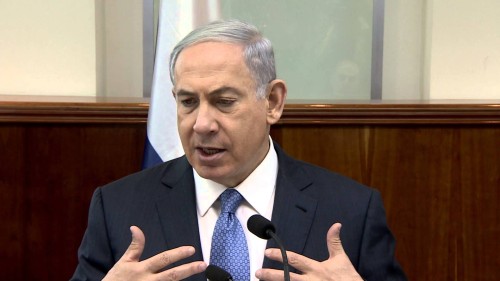 Trying again to undermine the nuclear talks between Iran and the 5+1 Powers, Israel’s Prime Minister Benjamin Netanyahu said on Sunday that he has been speaking to US Congressional leaders and linked the negotiations to developing conflict in the Middle East.

Netanyahu referred both to the discussions in Lausanne, Switzerland and to fighting in Yemen, where the Shia Muslim Houthi movement has been expanding its control but now faces Saudi-led aerial attacks: “The Iran-Lausanne-Yemen axis is very dangerous for humanity and needs to be stopped.”

The Prime Minister said at the start of a Cabinet meeting that he had discussed matters with US Senate leaders, Republican Mitch McConnell and Democrat Harry Reid, over the weekend. Netanyahu said he expressed “deep concern over the agreement being formulated in the nuclear talks”.

Earlier this month, Republican leaders in Congress arranged for Netanyahu to address a joint session, going behind the back of the White House. Subsequently, 47 Republican Senators wrote an open letter to Tehran saying that any agreement would be limited to President Obama’s term in office without Congressional approval, and the Senate voted 100-0 to express its intention to reimpose sanctions if it found Iranian violations of an interim or comprehensive nuclear agreement.

Even as meetings proceed on this dangerous agreement, Iran’s proxies in Yemen are overrunning large sections of that country and are attempting to seize control of the strategic Bab-el-Mandeb straits which would affect the naval balance and the global oil supply.

After the Beirut-Damascus-Baghdad axis, Iran is carrying out a pincers movement in the south as well in order to take over and conquer the entire Middle East. The Iran-Lausanne-Yemen axis is very dangerous for humanity and needs to be stopped.