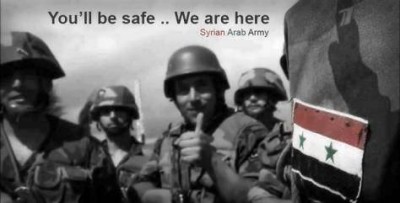 Checked in its initial offensive south of Damascus last month, the Syrian military — with the significant presence of Hezbollah, Iranian, and Afghan fighters and commanders — has renewed the campaign across a 20-km (12-mile) front.

The offensive made limited gains, notably the capture of the town of Deir al-Addas; however, the Assad forces took heavy losses as rebels counter-attacked the claimed territory. With Syrian aerial operations limited by bad weather, the Syrian military was unable to press farther into Daraa Province.

Last week, with improved conditions, the offensive was renewed with a heavy aerial bombardment. Ground troops were able to reclaim the hilltop of Tel Fatima and villages such as Himrit, al-Habariya, and Sultaniyah. The Assad forces are hoping to claim the towns of Kafr Nasij and Kafr Shams, both of which were pounded by barrel bombs on Tuesday.

Rebel resistance is still fierce, with significant casualties among the attackers, as the opposition continues guerrilla tactics and counter-attacks around the advancing force. Among the confirmed dead were seven Afghan fighters, including a commander, honored in a memorial service in Iran on Tuesday.The slain commander, Alireza Tavassoli, has been working with the head of Iran’s elite Oods Force, General Qassem Soleimani.

Soleimani, who has been instrumental in organizing Iran’s intervention in Iraq against the Islamic State, was reportedly in Daraa just before the initial offensive to review the plans and attacking force.

Official statements from the rebels highlight the success of their ambushes. However, they also indicate that the opposition, after days of sustained fighting, may be facing shortages of weapons and ammunition.

The rebels were able to set off the explosive despite the defense of the complex by well-trained Syrian troops in a network of tunnels and underground facilities. The blast registered as a 3.0-magnitude earthquake on monitors in Turkey.

The detonation was followed by fierce clashes in the area, which rebels have been attacking along with nearby Layramoun since 2012.

State media ignored the bombing and claimed, “The army foiled an attack by terrorist organizations on al-Maliya square and the air intelligence branch, killing a number of terrorists.” The army is “reassuring that the situation is under full control“.

News of the attack from a Jabhat al-Nusra account:

#JN|Placing their Trust in Allah, Mujahideen storm the #Airforce_Intelligence & buildings around it, Don't forget them in your prayers(1)

#JN| (2) #JabhatAlNusra together with the participation of other factions. #Aleppo

Both regime and rebel sources are reporting an escalation of fighting in northern Hama Province.

Islam Alloush, a senior officer and spokesman for the Islamic Front, said on his his Twitter account and a pro-opposition site that rebels are attacking in the area.

Pro-regime accounts are claiming that the prominent Syrian commander, Colonel Soheil “Tiger” Hassan, and his elite unit have deployed in the province.

An opposition site is claiming that Syrian commanders are meeting with Hezbollah and Iranian counterparts at Hama Military Airport to pursue an offensive against nearby town.

Last summer rebels tried to seize territory around Hama Military Airport and closed in on the facility. However, they were eventually repulsed and a regime counter-offensive took the town of Morek on the highway to Aleppo Province.

Rebels also blew up a fortified position near Ariha in Idlib Province:

Unnamed sources tell Reuters that intelligence officials from Gulf States, including Qatar, have met the leader of Jabhat al-Nusra to encourage the Islamist faction to formally withdraw its pledge of allegiance to Al Qa’eda.

The officials have told Abu Mohamad al-Golani that the move would free up the Gulf States to provide more assistance to the rebelliion against the Assad regime.

The sources said there had been “several” meetings in the past few months.

A “source close to the Qatari Foreign Ministry” confirmed, “They are promising Nusra more support, i.e. money, supplies, etc, once they let go of the Qaeda ties.”

However, EA sources say that the issue is not about “support” of Jabhat al-Nusra — Qatar does not provide funding to it — but to foster a new group, including Syrians who are currently in the Islamist faction.

Muzamjer al-Sham, an official close to Jabhat al-Nusra and other Islamist factions in Syria, indicated this in his comment to Reuters:

A new entity will see the light soon, which will include Nusra and Jaysh al Muhajereen wel Ansar and other small brigades.

The name of Nusra will be abandoned. It will disengage from Al Qa’eda. But not all the Nusra emirs agree and that is why the announcement has been delayed.