Israel Analysis: Why Netanyahu’s Speech to Congress Was Not Really About Iran 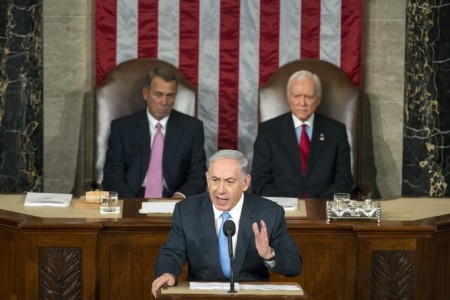 Asaf Siniver of the University of Birmingham, writes for The Conversation:

See also Israel Video and Transcript: Netanyahu’s Speech on Iran to US Congress

Until Tuesday, Winston Churchill was the only foreign leader to have addressed the US Congress on three separate occasions. Now Israeli Prime Minister Benjamin Netanyahu has joined this very exclusive club.

Termed by some as a “Churchillian moment”, Netanyahu used the opportunity to warn the world of the danger of striking a deal with Iran that allowed it to keep its nuclear infrastructure. He described it as a bad deal – though he did not elaborate on what a “good deal” would look like.

Netanyahu’s introduction was more significant than the rest of his address, during which he received more than 20 standing ovations. First, Netanyahu declared that:

The context of the address had far less to do with Iran than it did with politics – the domestic politics of the US and Israel, and the politics of the special relationship between the countries.

The invitation to address Congress came not from the White House, but from the House of Representatives Speaker, Republican John Boehner, keeping President Barack Obama out of the loop. It is the first time in US history that a foreign leader had been invited to address Congress without the president’s consent or knowledge. The White House described the Boehner-Netanyahu collusion as a breach of protocol.

But the invitation was much more than that. It was a cynical ploy to humiliate Obama and pressure him to take a tougher stand on the Iranian issue. Neither Boehner or Netanyahu made any attempt to disguise it: the plan to invite Netanyahu was ironed out between Boehner’s office and the Israeli embassy in Washington over a period of two weeks in January. The White House was notified of the invitation only after the Israeli ambassador, Ron Dermer, had officially accepted it on behalf of Netanyahu.

In protest, around 60 Democrats boycotted Netanyahu’s address. Vice President Joe Biden announced in February that he would not attend. Obama said on Tuesday that he was “too busy” to watch the speech, though having read the transcript, he told reporters there was nothing new in it.

As a further sign of the political storm caused by the Boehner-Netanyahu ploy, three major US TV networks – ABC, CBS and NBC – chose not to televise the address.

Israeli partisan politics also overshadowed the pretext of Netanyahu’s address. Israel’s general elections are only two weeks away, on March 17. Netanyahu was originally invited to address Congress on February 11, but he asked to postpone it by three weeks, when campaigning is in full swing. The scheduling of the address at 10.45am Eastern Standard Time – the evening prime-time slot in Israel – also suggests that Netanyahu’s address was designed to appeal more to voters back home than to the US Congress.

An anti-Netanyahu election advertisement in Israel:

The image of the incumbent prime minister addressing the US Congress on such a grave issue is supposed to be worth a couple of seats (or mandates). But, so far, the controversial move seems to have backfired. Netanyahu’s right-wing Likud Party trails the centre-left Zionist Camp alliance by two or three mandates.

House prices in Israel are spiralling out of control and the economy is showing signs of slowing down. Not only do many Israelis not seem to share Netanyahu’s existential anxieties about the prospect of a nuclear Iran, but they also accuse him of shirking his responsibilities by using the issue as a convenient tool to divert attention from domestic problems and the deadlock in negotiations with the Palestinians.

For many Israelis, the potential danger of a bad deal with Iran pales by comparison with the damage caused to US-Israeli relations by Netanyahu’s trickery. The personal rapport between Obama and Netanyahu has been strained for years. This recent incident has plummeted public relations between the countries to levels unseen for a generation.

Though the strategic, intelligence and security links between the countries are largely unaffected by the two leaders’ disdain for each other, such personal antagonism at the highest level has certainly clouded the weather. As such, Netanyahu’s remark that the people of Israel “appreciate all that President Obama has done for Israel” should not be taken for granted.

Some of what the president has done for Israel might never be known, because it touches on some of the most sensitive and strategic issues that arise between an American president and an Israeli prime minister. But I know it, and I will always be grateful to President Obama for that support.

This was the perhaps the most important message in Netanyahu’s address. It was much more important than the chewed-up warnings about Iran, which were not too dissimilar to his 2013 warnings against the first deal with Iran. Netanyahu’s repentant mention of Obama’s support for Israel was not a half-hearted gesture. It was a personal, earnest and humble apology, designed to rectify a broken friendship.

After the controversy leading up to the address, the substance of Netanyahu’s message was predictably anti-climatic and repeated his previous well-trodden warnings. The Iranian regime was “as radical as ever” and would not change its behaviour; the lifting of the current sanctions would make Iran more – not less – aggressive; and Iran’s recent fight against Islamic State (IS) did not turn it into a friend of the US. Netanyahu warned that, with Iran and IS competing for the crown of militant Islam, the enemy of my enemy is my enemy.

Netanyahu’s demands of Iran are also neither novel nor helpful for the current negotiations. He warned that before current sanctions are lifted, the world should demand Iran stop its aggression against its neighbours in the Middle East, stop supporting terrorism around the world and stop threatening to annihilate the Israeli state.

Such vociferous rhetoric may have won the applause of the US Congress, but it is unlikely to go down in history as a Churchillian moment.