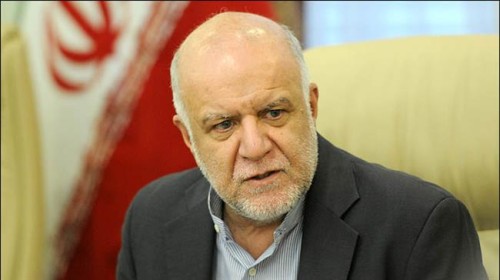 With Iran facing compounded economic difficulties because of falling global oil prices, Oil Minister Bijan Namdar Zanganeh (pictured) has given a gloomy report to Parliament of the situation in the near-future.

The session was behind closed doors, but Zanganeh told journalists afterwards that he could not offer any hope of a recovering oil price, saying it was “not predictable” because of “political factors and intentions”.

The price has fallen from about $120/barrel in June to less than $55/barrel. Oil is by far Iran’s biggest source of revenues and the largest component in the Government’s budget.

The 2015/2016 budget, submitted to Parliament last month for review, faces a large deficit. The Government has cut its projection of oil revenues from $100/barrel to $72/barrel.

Zanganeh declared, “We have shown that we will not withdraw from our [political] positions by decreasing oil prices and will not change our positions; we will continue our resistance regardless of oil prices”; however, he said Iran “will not call for an OPEC emergency meeting unless it sees consensus among the members”.

On Sunday, President Rouhani offered a vague promise of salvation through foreign investment in Iran’s economy. Extending a message he offered soon after his inauguration in August 2013, Rouhani said, “Gone are the days when it was said if foreign investors come to Iran, its independence will suffer….[This] doesn’t mean letting go of the nation’s ideals and principles.”

The President did not explain in detail how investment would restore production and employment as well as bolstering the budget and Iranian currency. Almost all foreign firms have withdrawn from involvement in Iran’s oil and gas fields since 2010, and US-led sanctions continue to restrict investement in other sectors.

Instead, Rouhani blamed his predecessors in the Ahmadinejad Government for mismanagement: “It’s been the economy that pays for the politics. It would be good for once to act in reverse and have internal politics and foreign policy pay for the economy.”

The President again derided monopolies in the Iranian economy. Last month, the statement was taken as an implicit criticism of the Revolutionary Guards, who have widely expanded their economic interests and projects.

However, even as Rouhani spoke, his hopes were being undercut by his top officials. Economy Minister Ali Tayyebnia, speaking to the same conference in Tehran, expressed “dim hopes that a détente with international community would bring the influx of foreign resources to a hard-pressed economy”.

Another senior official offered the reassurance that “the government has approved 687 operational and time-tabled plans to implement the Economy of Resistance policy to counter sanctions imposed on the country over its peaceful nuclear program”.