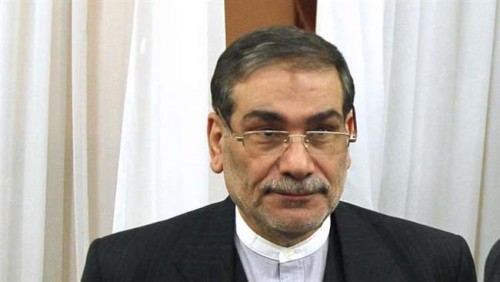 After weeks of denouncing Saudi Arabia over falling oil prices — and days after blaming the Saudi Foreign Minister for the failure of a possible high-level meeting in Riyadh — Iran’s regime has renewed the possibility of engagement.

Shamkhani, who is Secretary of the Supreme National Security Council, was meeting Iran’s envoy to the Saudi kingdom, Hossein Sadeghi. He said talks could include all issues of mutual interest, including the threat of the Islamic State and the dispute over oil prices that have fallen 60% since June, with a more “pragmatic contribution” by Iran and Saudi Arabia.

The regime even distanced itself from its recent allegations of Saudi involvement in a “foreign plot” against Iran and the Islamic world, with Ambassador Sadeghi declaring that “misunderstandings between Iran and Saudi Arabia should be cleared”.

There was no obvious reason for the sudden shift in Iran’s tone. Only last weekend, officials said that Saudi Foreign Minister Prince Saud had prevented a visit by his Iranian counterpart Mohammad Javad Zarif to Riyadh. The officials specifically said that Saud’s remarks on the Syrian crisis had been provocative and supported “terrorism”.

President Rouhani has sought engagement with Saudi Arabia since his election in 2013, but has been challenged by hardliners opposed to warmer relations with the Saudis.

The head of the Basij militia, Mohammad Reza Naqdi, has harshly criticized Foreign Minister Mohammad Reza Zarif and said that he “must apologize to the people for the mistakes he has made”.

Commenting on Zarif’s performance in nuclear negotiations and on other matters of foreign policy, Naqdi said, “I thought Zarif was a professional diplomat but now I believe he is not.”

Naqdi claimed Zarif’s mistakes included his warning that the US could break Iran’s defenses with a single missile and his walk with US Secretary of State John Kerry during talks last week in Geneva, “which is stepping on the blood of our martyrs”.

The commander said Zarif’s “worst and unforgivable [mistake] was his journey to France on the day when the insulting cartoon of the Prophet Mohammad was published” by Charlie Hebdo magazine.

Naqdi concluded, “These mistakes show that Zarif is not Iran’s representative and cannot defend the rights of Iranians.”

Government spokesman Mohammad-Baqer Nobakht hit back at the criticism of Zarif’s walk with Kerry, “The hardliners should know that, they hold no place among people.”

President Ahmadinejad’s 1st Vice President, Mohammad Reza Rahimi, has finally been given a 5-year and 91-day prison sentence and a fine of 1 billion Toman (about $280,000) on fradu charges.

For years, Rahimi was suspected of involvement in a multi-million-dollar insurance fraud, the Fatemi Street Ring, but was only prosecuted in 2013 after the end of the Ahmadinejad Administration. Reports circulated in autumn 2014 that he had been convicted.

Rahimi has also been order to return almost 3 billion Tomans (about $900,000) to Iran’s National Treasury.

One of a series of photographs of the funeral procession for Revolutionary Guards General Mohammad Ali Allahdadi, killed in an Israeli airstrike on Hezbollah and Iranian forces in southwest Syria on Sunday: 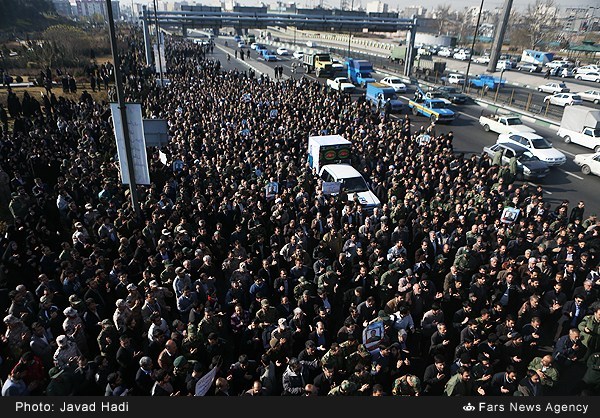 Finance Minister: We Have No Problems with $25/Barrel Oil

Finance and Economic Affairs Minister Ali Tayyebnia has insisted that the Government will not be in difficulty with sharply-falling oil prices, even if they reach $25/barrel.

Last month, the Government presented a revised draft budget, assuming revenues of $72/barrel rather than $100/barrel. It claims that it can finance its spending with increased non-oil income and tax revenues.

“For the time being, predicting oil price fluctuations is not possible. So, the administration is preparing itself to deal with any probable situation,” Tayyebia said.

The Supreme Leader has proclaimed that Iran can pursue a “Resistance Economy” to cope with both the oil price and the US-led sanctions that have affected Iranian exports, production, currency, and financial sector.

Rouhani on Charlie Hebdo Killing: “Catastrophic To Consider Insulting Others As Freedom”

President Rouhani has issued his first public statement on the mass killing at the Charlie Hebdo magazine in Paris earlier this month.

It is catastrophic to consider insulting others as freedom and it is regretful that in our modern, civilized world some individuals are not aware of this fact.

Insulting others and stirring their emotions in the name of freedom is igniting extremism and preventing healthy relations between Islamic countries and other parts of the world.

Tehran initially condemned the assault that killed 12 people, following by the slaying of five others in the French capital; however, its main line has been denunciation of the publication of Mohammad’s image. Iranian officials have gone as far as to assert that French intelligence services and “Zionist regime” were connected with the attack on Charlie Hebdo.

On Monday, the regime supported a protest outside the French Embassy. Yesterday Foreign Minister Mohammad Javad Zarif said during a trip to Afghanistan, “We clearly condemn any act of terrorism, so do our religious authorities in Friday Prayers, however, the result of such insults is what you witnessed in Paris.”

The misleading headline of the day is in Fars News, the outlet of the Revolutionary Guards, “Iran, Russia Agree on Delivery of S300 Defense System“.

Moscow cancelled the $800 million contract for the advanced anti-aircraft missile system in 2010, falling in line with UN sanctions against arms deliveries to Iran. Despite sustained efforts by Tehran to reverse the decision, the Russians have repeatedly held off any commitment.

Fars’ headline indicates that the breakthrough came on Tuesday during the visit of Russian Defense Minister Sergei Shoygu to Tehran. However, only general agreements for cooperation were signed, and Shoygu’s statement merely heralded a “long-term and multifaceted” military relationship with Iran and “a theoretical basis for cooperation in the military field”.