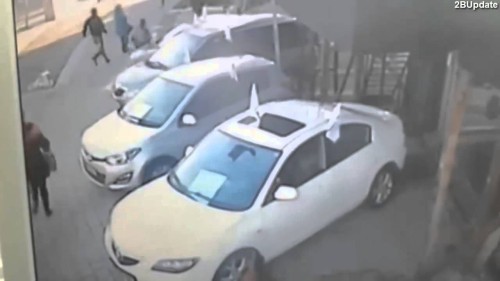 At least 12 people have been injured, three seriously, in a stabbing attack on a bus in Tel Aviv in Israel.

Eight of the victims are still hospitalized. One of the seriously injured is the bus driver, who wrestled with the attacker and was stabbed in the chest. Some of the wounded were on the bus, which the assailant rode for two stops before his assault; some were hurt when the man left the bus and continued the stabbings.

The suspected attacker, a 23-year-old Palestinian man from Tulkarem, in the West Bank was shot by security forces and is in custody.

The Ma’an News Agency said the suspect, Hamza Muhammad Hasan Matrouk, was not affiliated with any political groups. It reports that the Israel Defense Forces summoned his father and other relatives for questioning.

Claimed video of the attack — as people flee, the assailant enters from the left side of the screen and stabs a woman in the back:

Writing on Twitter, Hamas official Hamas official Izzat al-Rizheq said the “heroic and daring” attack was “a natural response to the occupation and terrorist crimes against our people”.

The attack in Tel Aviv is the direct result of the poisonous incitement spread by the Palestinian Authority toward the Jews and their state. The same terror tries to harm us in Paris, Brussels, and everywhere.

The ones who rushed to praise this attack are Hamas, the partners of Abu Mazen [PA leader Mahmoud Abbas] in the unity government.

Defense Minister Moshe Ya’alon claimed the attacker was “grown in the ground of incitement against the State of Israel”:

We won’t let anyone disrupt the lives of our citizens, we will pursue anyone who plans and carries out terrorist attacks at any time and any place, and we’ll act to thwart every attempt at terrorism. We won’t compromise on the security of Israeli civilians.