Syria Developing: US Renews Attacks on Mysterious “Khorasan Group” — But Is It Actually Targeting Insurgents? 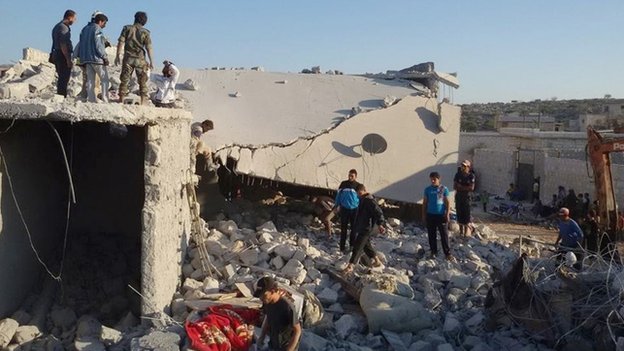 UPDATE 0600 GMT: A senior official of the prominent insurgent faction Ahrar al-Sham makes an important claim — it was the target of Wednesday night’s US airstrikes:

Ahrar al-Sham was formed by Islamist units and quickly became one of the largest factions in the insurgency. Unlike Jabhat al-Nusra, it has never recognized the leadership of Al Qa’eda, nor has it been designated a “terrorist organization” by the US.

The “Khorasan Group”, an organization which was suddenly identified by the US as an “imminent terrorist threat” last month — as the Americans hit the Islamist faction Jabhat al-Nusra with missiles — has resurfaced in Washington’s announcements.

The supposed terrorist collective had disappeared from public declarations soon after the US military said it was the target of attacks on Jabhat al-Nusra buildings in Idlib and Aleppo Provinces on September 23, the first day of the American aerial intervention in Syria.

However, an unnamed Defense Department official told Foreign Policy magazine that attacks were carried out on the Khorasan Group on Wednesday night in Sarmada in Idlib Province in northwest Syria. He said the military is still assessing whether specific individuals were killed.

The Local Coordination Committees, opposition activists in Syria, report “several martyrs and injuries” from the US strikes on Sarmada.

US officials first publicly claimed the existence of the Khorasan Group in mid-September, initially through a leak to the Associated Press and then through a statement by Director of National James Clapper.

See Syria Special: How the US Lost Its War Within Hours
Syria Daily, September 29: Have US Airstrikes Bolstered the “Extremists”?

On September 23, even before attacking its declared target of the Islamic State, the US fired more than 40 Tomahawk missiles on the Jabhat al-Nusra complexes in northwest Syria, killing more than 60 fighters and at least 14 civilians.

Washington never acknowledged an attack on Jabhat al-Nusra, declared a “terrorist organization” by the US in late 2012. Instead, the US military said it was confronting the threat of the Khorasan Group.

Subsequent reports claimed the death of the supposed head of the Group, a Kuwaiti named Muhsin al-Fadhli. However, the US intelligence community later put out the message that al-Fadhli and Drugeon had probably survived, while insisting that it would pursue further attacks.

Questions arose over the existence of the “Khorasan Group”. Analysts noted that, while foreign fighters had identified themselves as coming from “Khorasan” — an area of Afghanistan and Pakistan — this was not the same as the formation of a terrorist cell which had gone to Syria.

A subsequent investigation by al-Aan News indicated that some fighters killed by US missiles were members of a “Wolf” unit of snipers within Jabhat al-Nusra.

The US attacks on Jabhat al-Nusra were criticized by the Islamist faction, by other elements of the insurgency, by the Syrian opposition inside and outside the country, and by residents in the area.