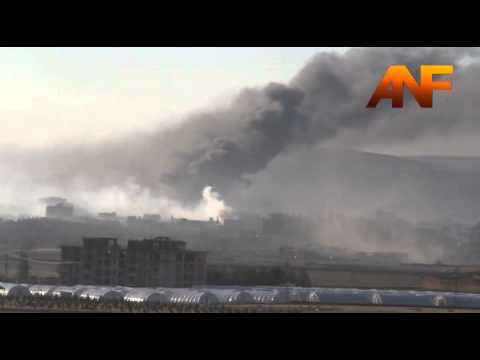 The Islamic State has renewed its offensive against the Kurdish center of Kobane in northern Syria, attacking the town from the south and east on Saturday and trying to seize a nearby border crossing.

The Kurdish militia YPG said the assault The Kurdish militia YPG said the attacks began with a suicide bomb in an armored vehicle and two other suicide attacks on the Mürşitpınar border crossing with Turkey at about 5 a.m. local time. THe jihadists reportedly brought in reinforcements from some of their other key positions in Syria, including the town of Manbij and Raqqa, the largest city outside Assad regime control.

The Turkish Government denied the claims of Kurdish activists that the Islamic State had launched the vehicle bomb attack on the Mürşitpınar crossing from its territory: “The allegation that the vehicle in the mentioned attack reached the border gate through Turkish land is definitely a lie.”

The co-chair of the Kobane council, Anwar Muslim, went farther with the allegations: “Under the pretense of stopping an ISIS attack on Turkey the Turkish army bombarded the center of Kobane with tanks and artillery. A number of civilians and fighters have been wounded.”

Muslim claimed the Turkish authorities cut electricity during their bombardment.

Smoke from above Kobane:

Footage of the fighting:

The Islamic State began its assault on the Kobane area, one of three Kurdish cantons in Syria, in mid-September. It soon seized scores of nearby villages and hills. By early November, it occupied up to 40% of Kobane.

However, in recent weeks, Kurdish militia have pushed back, forcing the jihadists into the southeast of Kobane and taking key hilltops.

Reports and videos claim that insurgents have renewed attacks on Zahraa, northwest of Aleppo, including a suicide vehicle bombing: