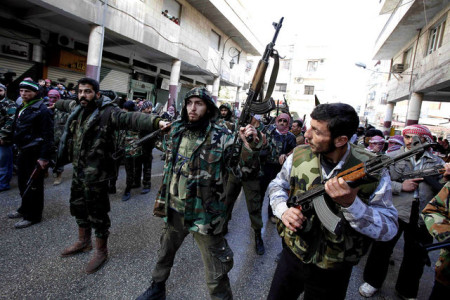 US officials have explained to The Washington Post how they will resolve Syria’s 44-month conflict through their program to train and equip 5,000 insurgents over the next year.

An official at the US Central Command reassured, “In the special operations community, we have a pretty long history of vetting and screening surrogate forces that we’ve worked with.”

The new plan goes even farther: “[It]

But the new plan “is unique to Syria, because we’re going to work with folks that we won’t accompany once we employ them,” he said. “So vetting and screening becomes even more important.”

A “senior US defense official” explained, “We’re taking it extremely seriously,” adding that fighters will “also be educated about the laws of armed conflict”.

The officials said that “successful participants would gradually attain access to higher levels of training and weaponry, and fighters found to be wanting [will] be dismissed from the program”.

The Turkish Government denied on Saturday that the Islamic State launched an attack on the northern Syrian town of Kobane from its territory.

It is known that the terrorist group ISIS has been attacking too many places simultaneously in Kobane and also to Mursitpinar border gate since this morning.

One of these attacks was made in the Syrian side of the border by a bomb-laden vehicle.

The allegation that the vehicle in the mentioned attack reached the border gate through Turkish land is definitely a lie.

Activists had claimed that the Islamic State attack on the mainly-Kurdish Kobane came from the Turkish side of the border.

The jihadists are attacking the town, which it has besieged for almost three months, “from all sides”, according to a spokesman for Syria’s Kurdish Democratic Union Party.

The Kurdish militia YPG said the attacks were heaviest from the south and east, with the Islamic State bringing in reinforcements from other areas such as Raqqa and Manbij.

The assault began with a suicide bomb in an armored vehicle and two other suicide attacks on the Mürşitpınar border crossing near Kobane at about 5 a.m. local time.

Footage from a Turkish outlet of the fighting:

The Islamic State had occupied up to 40% of Kobane earlier this month but Kurdish forces have been counter-attacking, recently pushing the jihadists into the southeast corner of the town and taking surrounding hills.

The funeral march in Aleppo for Majid Kerman, a fighter of Jaish al-Mujahideen: