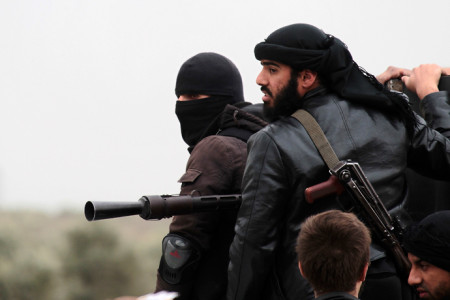 The Associated Press and other outlets headline the false information this morning that the Islamic State and the “Al Qa’eda” — i.e., the Islamist faction Jabhat al-Nusra — have reunited to fight the “moderate” Syrian insurgency.

AP declares, “IS, Al-Qaida Reach Accord in Syria“:

Militant leaders from the Islamic State group and al-Qaida gathered at a farm house in northern Syria last week and agreed on a plan to stop fighting each other and work together against their opponents, a high-level Syrian opposition official and a rebel commander have told The Associated Press….

The Associated Press reported late last month on signs that the two groups appear to have curtailed their feud with informal local truces. Their new agreement, according to the sources in rebel groups opposed to both IS and Nusra Front, would involve a promise to stop fighting and team up in attacks in some areas of northern Syria.

However, as soon as Jabhat al-Nusra defeated the Syrian Revolutionary Front — which has received political and military backing from the US — in northwest Syria in a local dispute last month, false stories began appearing that the Islamist faction was again fighting alongside the Islamic State. In particular, articles claimed — with no support other than assertions from unnamed individuals — that Islamic State fighters had helped Jabhat at al-Nusra in its fight against the SRF and another US-backed group, Harakat Hazm.

Much of the “information” fed to the press came out of Turkey. Some of it was from SRF members pushing back against their defeat. Some came from members of the Free Syrian Army who see Jabhat al-Nusra as a threat for leadership within the insurgency.

According to a Syrian opposition official speaking in Turkey, the meeting took place Nov. 2 in the town of Atareb, west of Aleppo, starting at around midnight and lasting until 4 a.m. The official said the meeting was closely followed by members of his movement, and he is certain that an agreement was reached. The official said about seven top militant leaders attended.

A second source, a commander of brigades affiliated with the Western-backed Free Syrian Army who is known as Abu Musafer, said he also had learned that high-ranking members of Nusra and IS met on Nov. 2. He did not disclose the exact location, but said it was organized by a third party and took place in an area where the FSA is active.

According to Abu Musafer, two decisions were reached: First, to halt infighting between Nusra and IS and second, for the groups together to open up fronts against Kurdish fighters in a couple of new areas of northern Syria.

In addition, Joanna Paraszczuk wrote yesterday of an initative by a small, mainly-Chechen faction to reach a cease-fire with the Islamic State in Raqqa in northern Syria. The Islamic State rebuffed the attempt.

Meanwhile, far from waging an all-out campaign to destroy Harakat Hazm — which clashed with Jabhat al-Nusra in the northwest when it tried to block reinforcements moving to the battle with the SRF — Jabhat al-Nusra is cooperating with the US-backed group in the ongoing to defend the key point of Handarat, north of Aleppo.

None of this, however, is likely to disturb the false narrative spreading across outlets. The “information” campaign is the complement to a military approach in which the US is now attacking Jabhat al-Nusra, under cover of saying that it is targeting a “Khorasan Group” posing an imminent terrorist threat to the US.

Indeed, the AP story bears the mark of the US guidance on “Khorasan” — initially spread by the outlet in mid-September, a week before the Americans hit Jabhat al-Nusra in their first missile strikes within Syria. Moreover, it also tarnishes the insurgent faction Ahrar al-Sham — which has no ties to Al Qa’eda, but was still attacked by the US in airstrikes last week:

According to the opposition official, the meeting included an IS representative, two emissaries from Nusra Front, and attendees from the Khorasan Group, a small but battle-hardened band of al-Qaida veterans from Afghanistan and Pakistan. Also reported present at the meeting was Jund al-Aqsa, a hard-line faction that has sworn allegiance to IS; and Ahrar al-Sham, a conservative Muslim rebel group.

The line will be that the SRF, despite its defeat, and other groups — seeking weapons from the US-led command center in Jordan and/or part of the $500 million recently pledged by the Obama Administration to train and equip selected insurgents — can be part of a reorganized “moderate” force to take on Jabhat al-Nusra and the Islamic State, as well as the Assad regime:

With moderate rebels facing defeat by al Qaeda in Syria’s north, groups holding a corner of the south are seeking a higher profile and more help, as the last Western-backed forces holding out against both President Bashar al-Assad and the jihadists.

The southern rebels, described by Western officials as the best organized of the mainstream opposition, say they are the last hope for a revolution hijacked by jihadists. In recent days they have laid out a transition plan for a Syria without Assad, taking on a political role that in the past they left to others.