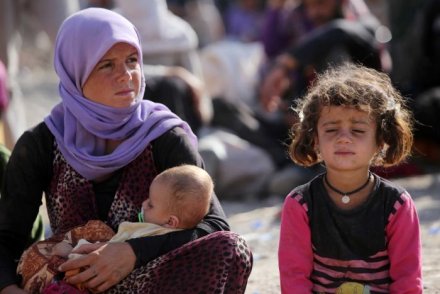 The Islamic State has exalted its capture, enslavement, and selling of Yazidi women and children following its offensive in northwestern Iraq this summer.

The abduction and slavery of Yazidis — members of a religion drawing from Zoroastrianism, Christianity, and Islam — has been reported since the Islamic State’s seizure of towns and villages like Sinjar in August. There have been claims that women have been forced into “temporary marriages”, i.e., sexual relations, with Islamic State fighters.

This week, Human Rights Watch reported, based on the testimony of relatives of abducted Yazidis, that hundreds of men, women, and children had been seized.

The jihadists have now not only acknowledged the kidnappings and enslavements but have put forth a lengthy religious justification.

In its official publication Dabiq, the Islamic State denounces the Yazidis as a sect which “never accepted Islam nor claimed to have adopted it”. Therefore, “their women could be enslaved unlike female apostates [lapsed Muslims] who…cannot be enslaved and can only be given an ultimatum to repent or face the sword”.

The explanation invokes the practice of khums, in which 1/5 of the spoils of war was set aside for the Prophet Mohammed:

After capture, the Yazidi women and children were then divided…amongst the fighters of the Islamic State who participated in the Sinjar operations, after 1/5 of the slaves were transferred to the Islamic State’s authority to be divided as khums….

The enslaved Yazidi families are now sold by the Islamic State soldiers….Many well-known rulings are observed, including the prohibition of separating a mother from her young children.

And for those who question the practice, the Islamic State claims benefits for the abducted as well as the jihadist movement: “Many of the…women and children have willingly accepted Islam and now race to practice it with evident sincerity after their exit from the darkness.”

Referring to “temporary marriage”, the article argues, “A number of contemporary scholars have mentioned that the desertion of slavery had led to an increase in fāhishah (adultery, fornication, etc.), because the shar’ī alternative to marriage is not available, so a man who cannot afford marriage to a free woman finds himself surrounded by temptation towards sin.”

If you still don’t accept the argument, the Islamic State explains that you are damned, just like the Yazidi:

Before Shaytān [Satan] reveals his doubts to the weak-minded and weak hearted, one should remember that enslaving the families of the kuffār and taking their women as concubines is a firmly established aspect of the Sharī’ah that if one were to deny or mock, he would be denying or mocking the verses of the Qur’ān and the narrations of the Prophet, and thereby apostatizing from Islam.