Syria Daily, Oct 14: US Coalition Meets in Washington — But Will It Matter for Kobane…or Al-Waer? 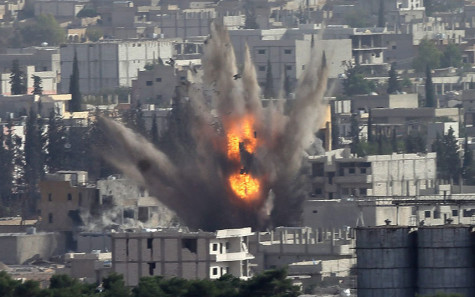 LATEST: Video — Insurgents Use Tunnel Bomb Against Regime Near al-Hamidiya Base in Idlib Province

UPDATE 1220 GMT: US officials have confirmed that no representatives of the Syrian opposition will be at today’s 21-nation conference on measures against the Islamic State — and that there will be no coordination of operations with the Syrian insurgency.

The U.S. government has no near term plans to include the Free Syrian Army or any other moderate rebel group in the military mission to fight ISIS. None of these opposition figures were even invited to the anti-ISIS coalition meeting being held at Andrews Air Force Base near Washington and chaired by Joint Chiefs Chairman Gen. Martin Dempsey. U.S. defense officials told The Daily Beast the Syrian rebel groups are simply not partners in the airstrikes against ISIS in Iraq and Syria, which have been failing to stop the Islamic State’s advances both in northern Syria and western Iraq.

“We’ve said this is an Iraq-first strategy,” Col. Edward Thomas, Spokesman for the Joint Chiefs of Staff, told the Daily Beast. “We have not yet moved to the stage in Syria where we would work with partners on the ground.”

UPDATE 1200 GMT: French President Francois Hollande has urged “all countries concerned” to provide weapons to those battling the Islamic State.

“I am launching an appeal here, beyond the coalition, to all countries concerned to give this opposition the support they expect from us, the means they need to fight against terrorism,” Hollande said.

UPDATE 1150 GMT: A Syrian Kurdish official has said that a “symbolic” amount of military aid from Iraq’s Kurdistan Regional Government, meant for the defense of Kobane, is stuck in northeastern Syria because Turkey will not open a corridor for delivery.

The shipment including ammunition for light weapons and mortar shells, said Alan Othman, a media official in the Syrian Kurdish military council in northeastern Syria.

Iraqi Kurdistan Prime Minister Nechirvan Barzani said last weekend, “We have supported Kobane in terms of weapons and ammunition,” although no Iraqi Kurdish peshmerga had moved into Syria “due to geographic restrictions”.

UPDATE 1130 GMT: Kurdish fighters have reportedly pushed the Islamic State back to the west of Kobane, retaking the strategic hilltop Tal Shair.

The advances came after a series of airstrikes by a US-led coalition.

Tal Shair was captured on October 4 by the Islamic State. 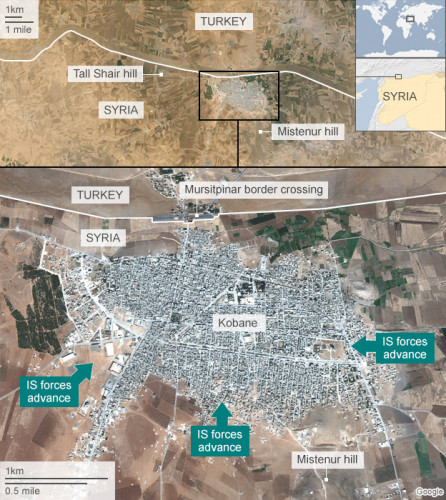 More than 21 countries in the US coalition against the Islamic State will meet in Washington today to discuss possible operations in Iraq and Syria.

However, there is little sign that the discussions will have any impact on the defense of Kobane, the Kurdish center in northern Syria, with leading US officials — including Secretary of State John Kerry — effectively giving up the town to the jihadists.

It comes as the US and Turkey continue to haggle over the approach to northern Syria and Kobane, close to the Turkish-Syrian frontier. The Americans, refusing to coordinate with any ground force such as Syrian insurgents, are insisting that Ankara put in troops near Kobane — even though the Syrian Kurds have said they will not accept an “occupation” and instead want Turkey to allow the free flow of Kurdish men across the border.

Turkey is pressing for “safe havens” and a buffer zone with air cover. The Erdoğan Government says it will only put in troops as part of an international force.

On Monday, US officials said Ankara had agreed to allow foreign forces to use its bases. However, Turkish officials knocked back the claim, saying talks were ongoing.

Meanwhile, activist “Samersniper” highlights that Kobane is far from the only area under deadly attack — while the Islamic State bombards the Kurdish center, the Assad regime is doing the same to the al-Waer district of Homs:

The neighborhood contains more than 200,000 displaced civilians who escaped for their lives from other parts of the city, but it has become the daily target of countless missiles, all sorts of artillery, and explosive cylinders fired by the Assad forces and his sectarian militias commanded by the diabolic Iranian regime, killing many civilians, mostly women and children.

All this comes in the light of the terrible silence of the international community and the countries so-called Friends of Syria….Residents of the neighborhood and the rebels did not hesitate in providing peaceful solutions that protect the neighborhood and its residents, the solutions which have always been defused by Assad loyalists and his security officials….

For that, we raise our voices and launch the campaign‪ #‎Our_Waar_Is_Burning‬ in hope we find a receptive ear. We are on the eve of a brutal Holocaust that alarms a large social and humanitarian catastrophe. Its highest price will be paid by the civilians of the neighborhood.

The regime is trying to remove insurgents, who evacuated other areas of Homs earlier this year, from the district:

Aftermath of a regime missile strike:

Video: Insurgents Use Tunnel Bomb Against Regime Near al-Hamidiya Base in Idlib Province

Footage of insurgent tunnel bomb attacks near the regime’s al-Hamidiya base in Idlib Province in northwest Syria, followed by an assault by fighters on the ground:

The attacks, carried out by the Islamic Front and the Free Syrian Army’s 13th Division, reportedly destroyed the al-Dahrooj checkpoint (see map), the Byout al-Shanera checkpoint, and two armored vehicles.

Clashes erupted in the outskirts of al-Dahrouj checkpoint following the blasts. Meanwhile, the insurgents targeted other regime checkpoints near Wadi ad-Deif and al-Hamidiya military bases with rocket launchers, mortars, and other heavy weapons.

Insurgents have been putting pressure on the Wadi ad-Deif and al-Hamidiya bases since the spring.

Video: Captured Afghan Fighter — I Was Let Out of Iranian Prison to Go to Syria

Questioning of a captured Afghan soldier, who says he was released from a 6-year drug sentence in Iran to fight for the Assad regime:

The interrogation complements long-running reports that the Islamic Republic has paid Afghan immgrants in Iran and even offered them citizenship to fight alongside Syria forces.

Saudi Foreign Minister Challenges Iran: “Get Your Troops Out of Syria”

Following a meeting with his German counterpart in Jeddah, Saudi Foreign Minister Prince Saud has demanded that Iran withdraw its “occupying” forces from Syria.

Declaring that Tehran is at the centre of trouble throughout the Middle East, Saud also challenged Iranian involvement in Iraq and Yemen: “In many conflicts, Iran is part of the problem, not the solution.”

He continued, “If Iran wants to be part of the solution in Syria, it has to pull its forces from Syria. The same applies elsewhere, whether in Yemen or Iraq.”