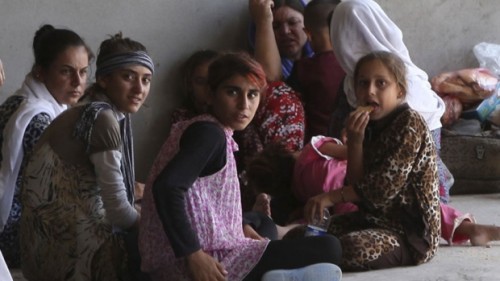 Islamic State is systematically separating young women and teenage girls from their families and forcing some of them to marry fighters in Iraq and Syria, according to Human Rights Watch.

The organization says hundreds of Yezidi men, women, and children are being held captive in formal and makeshift detention facilities in Iraq and Syria. It said the Islamic State has also taken away boys and forced captives to convert to Islam.

Communities of Yezidis — a religious sect combining elements of Zoroastrianism, Islam, and Christianity — have been overrun by the Islamic State’s offensive in northwest Iraq in August.

Human Rights Watch based its report on interviews with 76 relatives of the detainees, with 16 Yezidis who escaped Islamic State detention, and with two detained women who spoke via phone.

None of the former or current female detainees said they had been raped, but four said that they had fought off violent sexual attacks. They also said that other detained women and girls had spoken of rape by Islamic State fighters. One woman said she saw Islamic State fighters buying girls, and a teenage girl said a fighter bought her for $1,000.

The relatives said 366 of their family members were detained. They supported the claims with lists, identity cards, and photographs. Many said they had sporadic contact with the detainees, who had hidden their phones.

The two current detainees and the 16 escapees said they had seen hundreds of other Yezidis in detention. Some said the number was more than 1,000.