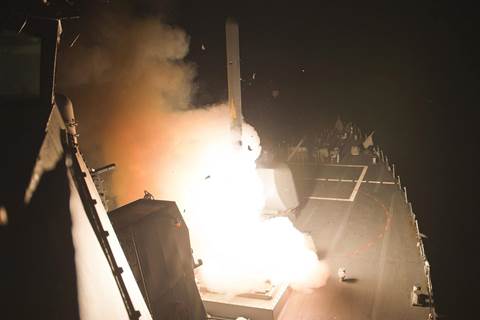 The US military says 12 modular refineries, which can constructed off-site and transported, were struck in operations that included drones and Saudi and UAE warplanes. Another attack destroyed a jihadist vehicle.

Britain is likely to join the operations on Friday, with the Conservative-led Government recalling Parliament for authorization.

The Islamic State makes millions of dollars by selling oil sold from fields seized in the past year, mainly in eastern Syria. However, production is limited because of the lack of infrastructure and equipment to maintain the fields. It is now estimated at less than 100,000 barrels per day.

Kurdish officials claim their forces have pushed back an Islamic State offensive south of the key town of Kobane (Ayn al-Arab), in northern Syria near the Turkish border.

The jihadists claimed a village and grain silos about 10 kilometers south of Kobane, but the Kurdish Deputy Foreign Minister in Kobane Province, Idris Nassan, said, “The [Kurdish militia] YPG responded and pushed them back to about 10-15 km [6-9 miles] away.”

The Islamic State is attacking Kobane from three directions, also taking scores of villages to the west and east of the town.

Kurds use a bulldozer to bury slain Islamic State fighters:

Syrian Military: We Have Captured Industrial Area of Adra, North of Damascus

The Syrian military claims that it has taken the industrial quarter of Adra, 12 miles north of Damascus, after sustained bombardment and a week-long ground offensive.

“A military source” claimed 46 insurgents of the ‎Islamic Front‬ bloc were killed and 31 insurgents wounded or captured.

Insurgents took over Adra in December 2013 and have held it despite repeated regime attacks.

Pentagon: “We Believe There Were No Civilian Casualties. Footage Was Faked”

Defying the claims and evidence of witnesses and activists, the US Defense Department says it has no indication that civilians were killed in US-led airstrikes this week.

A Pentagon spokesman, Colonel Steve Warren, said military intelligence is still incomplete, but “right now we believe there were no civilian casualties”.

Reliable activists say up to 25 civilians were slain on Tuesday by US missiles and bombs. In one incident, about 15 civilians died in an American attack on the position of the Islamist faction Jabhat al-Nusra in Kafar Daryan in Idlib Province.

However, Warren insisted, “We took all available mitigating actions to reduce civilian casualties.”

He said that footage of men trying to rescue victims under rubble were faked.

Warren also referred to the Jabhat al-Nusra buildings, hit in both Idlib and Aleppo Provinces, as “Al Qa’eda sites”.

For the second day in a row, The New York Times runs a lengthy article justifying the US Administration’s deadly attacks on the insurgent faction Jabhat al-Nusra on Tuesday.

It does so by channelling the Administration’s rhetoric about the “Khorasan Group”, an “imminent terrorist threat” which suddenly emerged last week.

This morning’s article repeats the dramatic narrative set out by unnamed US intelligence officials on Tuesday, after American missiles killed more than 60 members of Jabhat al-Nusra and at least 14 civilians — in an area where there were no Islamic State fighters, supposedly the main target of US operations:

Some time last year, a Kuwaiti man in his early 30s who had spent more than a decade hiding from the American government arrived in northwest Syria, where he met up with other members of Al Qaeda who had begun putting down roots in a country torn by two years of death and chaos.

American intelligence officials believe that the Kuwaiti, known sometimes as Muhsin al-Fadhli, had been sent from Pakistan by Ayman al-Zawahri, Al Qaeda’s leader, to take over a cell that could one day use Syria as a base for attacks in Europe and possibly the United States.

The Washington Post joins in and goes even farther — it praises a victory that not even the Administration is confirming:

U.S. missile strikes against an obscure Al Qa’eda cell in Syria killed at least one of the group’s leaders, delivering what U.S. officials described as a significant but not decisive blow to a terrorist group accused of plotting attacks against Europe and the United States.

U.S. officials said late Wednesday that American intelligence agencies had not confirmed reports that the leader of al-Qaeda’s Khorasan group, Mushin al-Fadhli, was the senior operative killed in the barrage of strikes west of Aleppo. But that prospect was a focus of ongoing U.S. efforts to assess the impact of the operation, carried out simultaneously with a broader offensive against the Islamic State.

Hours after President Obama called on the UN General Assembly to support “a broad coalition to dismantle [the Islamic State’s] network of death”, the Security Council unanimously approved measures against the jihadist organization.

Obama chaired the meeting and told members that “these terrorists exacerbate conflicts…pose an immediate threat to people in these regions, and…may try to return to their home countries to carry out deadly attacks”.

The resolution command all UN member states to “prevent and suppress the recruiting, organizing, transporting or equipping of individuals” who travel to another country to take part in terrorist acts or training. They must also “prevent the movement of terrorists or terrorist groups” through their territory “by effective border controls and controls on issuance of identity papers and travel documents”.