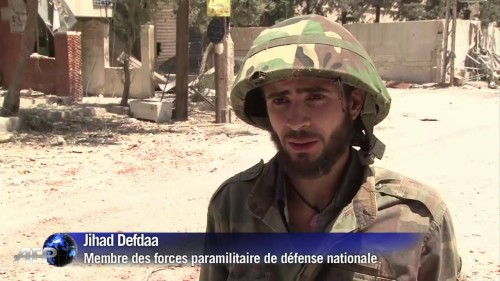 Video footage from the Syrian regime and international media on Friday confirmed the claims of President Assad’s military that it has captured the key town of Mleiha, 10 kilometers (six miles) east of Damascus, after months of siege and attacks.

The development is a sharp reversal of fortunes. Earlier this month, insurgents had taken regime checkpoints near Mleiha, breaking the siege.

However, the advance may have overextended opposition forces, as the Syrian military continued to attack the town with airstrikes and shelling. Earlier this week regime forces reportedly had taken the northern part of Mleiha, and the occupation was completed on Thursday.

Mleiha’s importance is its location as the “gateway” to the insurgent-held East Ghouta area near Damascus. It served as a key point in the ring of insurgent positions that could launch attacks into the capital. Conversely, its capture means the Syrian military can try to split opposition forces in East Ghouta from those in West Ghouta.

Escorted by Syrian troops on Friday, journalists from AFP saw celebrating soldiers, tractors removing rubble from the streets, and a signpost declaring “Main Mleiha Square” in the town centre near parked tanks. The army was also clearing buildings of mines.

A field commander told State news agency SANA that victory came when “personnel trained for urban combat and specifically for fighting in al-Mleha were deployed….This operation shifted from being a regular operation to a series of special operations within no more than 45 days, with some operations including infiltrating the very tunnels used by terrorists.”

A lieutenant said, army units had “penetrated Mleiha along several axes, killed a large number of armed men and seized their weapons. Those who were able to escape withdrew into Eastern Ghouta.”

He declared, “The Syrian army has destroyed the last hopes of the terrorist groups of entering Damascus.”

The pro-opposition Orient News reports on insurgent successes in the Qalamoun region near the Lebanese border:

The insurgents claim they inflicted heavy casualties on regime forces between Al-Dmeir and al-Rehaibeh, including Hezbollah fighters who tried to enter the battle from Lebanon’s al-Nahleh area.

Footage of insurgent forces, including armored vehicles, as they advance west of Hama Military Airport and Hama city:

The opposition forces have reportedly established a front line 2-3 kilometers from the airport and are shelling it with Grad rockets.

Sources who report on the developing fight between insurgents and the Islamic State in Aleppo Province (see below) add an interesting note about possible collaboration between jihadists and the Assad regime.

The sources note that Liwa Dawoud, a former insurgent faction, is fighting with the Islamic State after defecting in early July.

The link with the Assad reigme? When Liwa Dawoud defected, its fighters moved en masse from their base in Idlib Province to the Islamic State heartland in Raqqa Province. To get there, they crossed southern Aleppo Province, controlled by regime forces — in effect, getting safe passage. 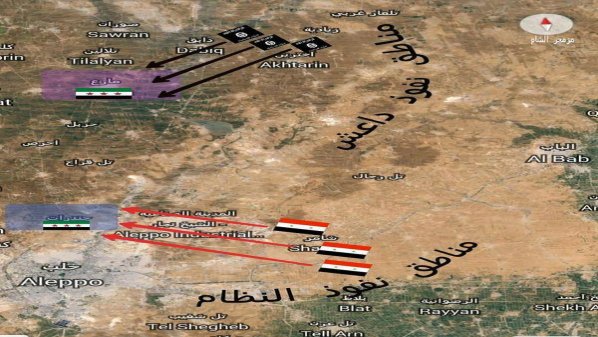 Insurgents Reinforce for Fight Against Islamic State in Aleppo Province

The insurgents have tried to establish a frontline east of Azaz, on the Turkish border, bringing in forces from western Aleppo Province and Idlib Province. A unified command has been established by the Islamic Front, Free Syrian Army, and Syrian Revolutionary Front.

The main problem for the opposition — “as always”, says one source — is the lack of ammunition. The source continues, “Key questions are whether the SRF opens up its huge stockpiles of arms and/or if the regular supplies from Turkey increase.”

The Islamic Front has taken a series of towns and villages across northern Aleppo this week. They are threatening Azaz, a key transit point for men, supplies, and weapons.

An Islamic Front fighter on the frontline firing at the jihadists:

The UN Security Council adopted a resolution on Friday night which prohibits funding and supply of arms both to the jihadist Islamic State and to the insurgent faction Jabhat al-Nusra.

The Council urged all UN members to prevent the movement of fighters from the groups into Syria.

The body also imposed sanctions on six named individuals accused of key roles in arranging support for the two groups.

Video: Friday’s Protest in Kafranbel “To Be Free Would Be Greater Than All The Magic in the World”

Friday’s rally in Kafranbel in northwest Syria invokes the words of comedian Robin Williams, who died this week: “To be free. Such a thing would be greater than all the magic and all the treasures in the world.”