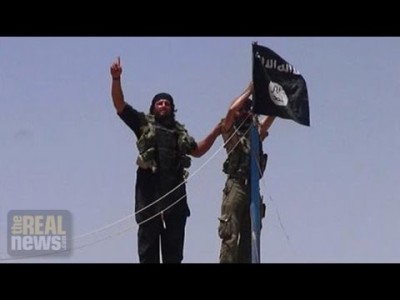 Op-Ed: To Defeat the Islamic State in Iraq, You Have to Intervene in Syria

The jihadist Islamic State moved quickly through northern Aleppo Province on Wednesday, inflicting heavy casualties on insurgents and adding to the threat to their position in Aleppo city.

Reversing its losses to the insurgents at the start of the year, the Islamic State took a series of towns and villages. They claimed Akhtarin and Turkmanbareh near the Turkish border and were reported in Suran, east of Azaz, last night.

Soon after the Islamic State turned against insurgents in January, they were pushed out of Azaz, a key border town near Turkey because of its role in the movement of men, weapons, and supplies.

Even more significant than the loss of territory were the heavy casualties suffered by the insurgency, including the Islamic Front bloc and other factions. Short of ammunition and weapons, they were unable to check the jihadists, bolstered with equipment from their recent successes in northern Iraq and eastern Syria.

The Islamic State’s advance further squeezes insurgents in Aleppo, Syria’s largest city, between the jihadists and the Syrian regime. The Supreme Military Council warned Wednesday that the Syrian military was closing the ring about insurgent-held areas, held for more than two years, in the eastern part of the city.

The Council noted the pressure of both ground attacks and the regime’s use of barrel bombs, increasingly effective and able to “take out entire neighborhoods”. It warned, “Aleppo will fall if the international community does not step up support.”

Asked from where that intervention would come, the source replied, “No one is willing to.”

Regime forces and Hezbollah lost 2 positions and suffered heavy losses in Qalamoun, near the Lebanese border, on Wednesday.

Regime casualties are reportedly heavy in the fighting between Al-Dmeir + al-Rehaibeh. Hezbollah fighters who tried to enter Qalamoun from Lebanon’s al-Nahleh area were ambushed and “returned in body bags”, according to an EA source.

On a day that started bleakly for the insurgents, there is far better news for them from Hama Province.

The Islamic Front took the village of al-Sheyha near the Hama Military Airport (see map), inflicting heavy casualties on Syria forces and looting arms and ammunition. To the north of the airport, the Free Syrian Army took regime positions at Arzeh and Tal al-Sheyha, with two Iranian soldiers among captured Syrian forces.

The insurgent frontline is now only 2-3 kilometers from the airport, one of the most important for the Syrian regime, and they are shelling it with Grad rockets. At least one helicopter was destroyed today.

A well-placed EA source adds the significant note that the insurgents are increasingly facing militia rather than regular Syrian troops.

Further north in the province, the insurgents continued to inflict damage on regime troops who have tried to take the key town of Morek. On Thursday they destroyed a BMP armored vehicle and killed most of the attacking force.

Responding to State media’s claims of the Syrian military’s move into the strategic town of Mleiha, near Damascus (see earlier entry), the Supreme Military Council has said that insurgents are carrying out a tactical re-deployment after battles lasting more than four months.

The announcement indicates that the opposition fighters are pulling back from the regime positions that they took earlier this month, breaking a long-standing siege of Mleiha, to reinforce defensive lines.

A well-placed EA source confirms the report, saying this should strengthen the insurgent defense, but adds, “Fierce clashes and a murderous bombardment from the air and artillery still ongoing.”

As the Islamic State advances in Aleppo Province, a protest against the jihadists:

Opposition Coalition Appeals for Immediate US Help in Aleppo

The opposition Syrian National Coalition has appealed for immediate American assistance to prevent the defeat of insurgents in Aleppo city:

The key city of Aleppo is on the verge of being crushed in a two-front attack: the Islamic State army on one side, and the forces of dictator Bashir al-Assad on the other.

Regime troops and the hard line fanatics of the Islamic State army are encircling Aleppo in an attempt to capture the city.

In a video posted on VICE and NBC News, the FSA is shown successfully using US provided TOW missiles to destroy enemy tanks. The sophisticated weapons are helping the U.S. backed FSA to gain ground.

The FSA is proving its use of sophisticated US weapons to be effective and responsible.

Snowden: US National Security Agency Took Down Syrian Internet in 2012

Edward Snowden, the former US Government employee who has revealed secrets of the National Security Agency, says in his latest interview that the Agency accidentally took down Syria’s Internet in 2012 as it tried to hack the system:

One day an intelligence officer told Snowden that TAO — a division of NSA hackers — had attempted in 2012 to remotely install an exploit in one of the core routers at a major Internet service provider in Syria, which was in the midst of a prolonged civil war. This would have given the NSA access to email and other Internet traffic from much of the country. But something went wrong, and the router was bricked instead — rendered totally inoperable. The failure of this router caused Syria to suddenly lose all connection to the Internet—although the public didn’t know that the US government was responsible. (This is the first time the claim has been revealed.)

Inside the TAO operations center, the panicked government hackers had what Snowden calls an “oh shit” moment. They raced to remotely repair the router, desperate to cover their tracks and prevent the Syrians from discovering the sophisticated infiltration software used to access the network. But because the router was bricked, they were powerless to fix the problem.

Fortunately for the NSA, the Syrians were apparently more focused on restoring the nation’s Internet than on tracking down the cause of the outage. Back at TAO’s operations center, the tension was broken with a joke that contained more than a little truth: “If we get caught, we can always point the finger at Israel.”

Claimed footage of Free Syrian Army fighters trying to hold off attacks on Mleiha, a key town east of Damascus:

Regime supporters are claiming that the Syrian military has taken over Mleiha after months of attacks. The town is the gateway to insurgent-held territory in East Ghouta.

State TV announced, “Units from the army and the armed forces continue their operations in Mleiha…and are achieving qualitative progress, and liquidating a large number of terrorists and pursuing what is left of them in farms north of the town.”