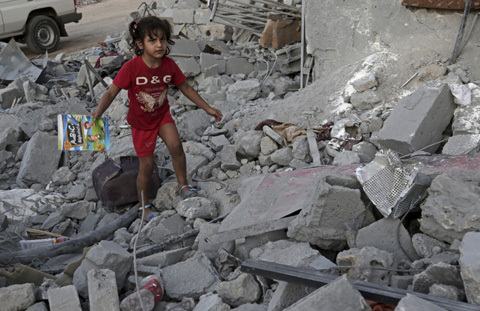 A 72-hour ceasefire in the Gaza War was extended by five days late Wednesday night, an hour before it was due to expire.

The extension gives more space for indirect talks between Israel and Palestine — including the Gazan leader of Hamas — with no sign of an imminent resolution to the 37-day conflict.

Hamas negotiator Izzat al-Rizheq claimed, “Five days are a long enough time period for us to see a result and for a respectable deal for the Palestinian people.” He said the truce extension was “not optimal, but we’re talking about tough negotiations, with Israel deceiving and attempting to shirk responsibility.”

There was some sniping at Prime Minister Benjamin Netanyahu for continuing the ceasefire. Avi Dichter, the former head of the domestic intelligence service Shin Bet, said, “What, are we suckers? We’re going now to bite our nails for another five days?” Senior Minister complained they were not being kept up-to-date, receiving their news about the negotiations “from Hamas”.

US officials also put pressure on Netanyahu through leaks to The Wall Street Journal. They said a phone call between President Obama and the Israeli Prime Minister on Wednesday night was “particularly combative”, as the newspaper reported that Washington has tightened control over arms transfers to Israel.

The officials said the Obama Administration was shocked to discover in late July that the Pentagon was providing Israel with ammunition for the war, as Secretary of State John Kerry was trying to broker a ceasefire. A transfer of a large batch of Hellfire missiles was put on hold.

The Israelis belittled Kerry as misguided, claiming he was siding with Hamas in his proposals. An Administration official hit back in the article: “The United States is their strongest friend. The notion that they are playing the United States, or that they’re manipulating us publicly, completely miscalculates their place in the world.”

Five rockets were launched from Gaza across the border a few hours before the ceasefire was set to end. Hamas denied responsibility, indicating other Gazan factions carried out the attack. The Israel Defense Forces hit several targets in Gaza in retaliation.